The Cocoa Fertilizer Initiative began in 2012 and was active for five years, its activities coming to an end in 2017. The Initiative aimed to restore soil fertility to key cocoa growing regions in Côte d’Ivoire, limiting farm expansion and deforestation, and ultimately enabling farmers to improve their livelihoods by turning cocoa farming into a sustainable business.

The productivity of cocoa in West Africa is under threat because of two important issues, soil depletion and land management. As soil is lacking nutrients and there is little land left for the cocoa farms to expand, a new approach to agricultural practices was needed.  The Cocoa Fertilizer Initiative contributed to the improvement of these issues by facilitating the process of adoption of good agricultural practices, improved planting materials and land intensification. This enabled cocoa farmers to maintain or enhance their crops, and increase their ability to cope with and recover from external pressures, and at the same time restoring soil fertility by limiting farm expansion and deforestation.

Through this Initiative important actors from the coco industry such as cocoa traders, fertilizer industry civil society organizations, and government were brought together in a mainstream, public-private consortium. The Initiative was funded by the World Cocoa Foundation (WCF), Le Conseil du Café-Cacao and fertilizer suppliers, and was implemented in partnership with IDH, the Sustainable Trade Initiative (IDH).

It collaborated closely with CocoaAction, a strategy set out by the World Cocoa Foundation (WCF) to coordinate and align the cocoa sustainability efforts of the world’s largest cocoa and chocolate companies. CocoaAction aims to build a rejuvenated and economically viable cocoa sector that can compete with alternative crops and provide opportunities for no fewer than 200,000 cocoa farmers and the cocoa communities in Côte d’Ivoire by 2020. In the future, the Initiative will develop strategies for addressing soil fertility in Ghana and Nigeria.

You can read more about the outcomes of the Initiative and its partners in the various publications available below.

The Cocoa Fertilizer Initiative aimed to identify and deliver fertilizer to 200,000 fertilizer-ready cocoa farmers in Côte d’Ivoire by 2020. Key actions that were undertaken include:

These actions were incorporated into the action plans of participating companies. Through these plans, individual cocoa companies identified fertilizer-ready farmers in their supply base and made independent agreements with fertilizer companies to train and distribute the fertilizer.

The plans were monitored by IDH, the secretariat of the Initiative, and supported by a financial risk-sharing mechanism developed and implemented by the African Fertilizer and Agribusiness Partnership (AFAP), as well as by the ongoing studies on the soil requirements and the impact of fertilizer. Fertilizers were a very relevant part of the holistic productivity packages tailored to the national, regional and local challenges of soil fertility.

The Initiative established a governance structure, composed of three committees and a secretariat, with the goal of overseeing programmatic implementation and provide guidance in Cote d’Ivoire.

The Supervisory Committee was responsible for steering the strategy of the overall Initiative, met two times per year, and was composed of government and industry representatives.

The Country Committee provided guidance to the in country operational implementation, and alignment in extension work and dissemination of the appropriate messages to farmers and their platform. It met four times a year and was composed of representatives from government, industry and research institutions. The Scientific and Country Committee reported to the Supervisory Committee.

The Secretariat supported all three committees. 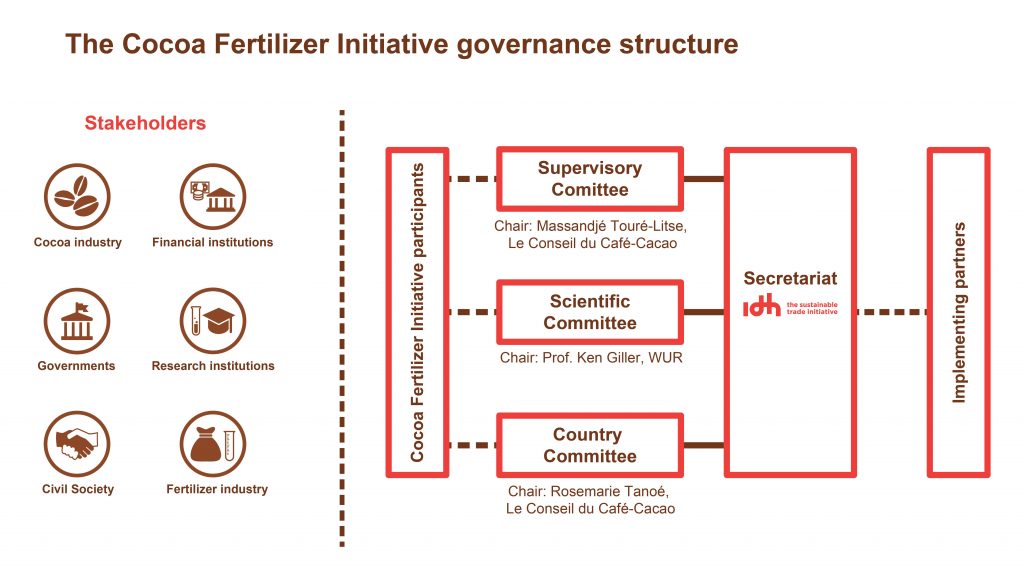