Transitioning to deforestation-free livestock in Brazil 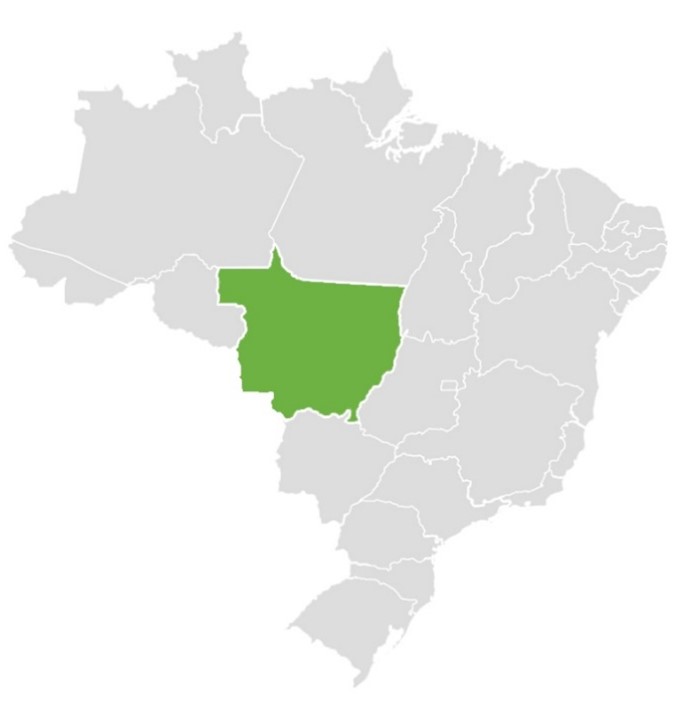 IDH’s Landscape Program in Mato Grosso began in 2015, primarily to support the government of Mato Grosso’s green-growth strategy, the Produce, Conserve and Include (PCI) strategy. As part of the implementation of the PCI Strategy in Mato Grosso State, IDH landed its investments at the regional level (with the Juruena Valley Compact) and at the field level (with the Sustainable Production of Calves Program) in 2018. In 2019, Marfrig and IDH became two of eight founding members of the PCI Institute.

Marfrig, the second-largest meatpacker in Brazil

Marfrig is the second-largest beef meatpacker in Brazil with approximately 30,000 direct suppliers and over 60,000 indirect suppliers, most of whom are cattle ranchers spread across the Amazon and Cerrado biomes, supplying primarily national but also international markets (over 70% of Brazilian beef production is consumed domestically).

Marfrig established a sourcing policy for direct suppliers in 2009 with a deforestation-free cut-off date of 2008, in line with the major beef companies’ 2009 Amazon Cattle Agreement. While the Agreement strengthened compliance mechanisms within the beef supply chain, it also resulted in excluding many small and medium-sized producers from the formal supply chain thereby reducing its effectiveness as a measure to halt deforestation.

To include the smaller-scale ranchers and develop a business case for sustainable intensification and forest protection, in 2018, IDH, Agro Jacarezinho Farms (a direct supplier of Marfrig), and Carrefour Brazil (an important buyer of  Marfrig) partnered in the Sustainable Production of Calves Program   in Juruena Valley. The pilot currently supports 157 calf suppliers towards a traceable, zero-deforestation supply chain. The first slaughtering of animals produced under the program took place in 2021 in Marfrig’s unit in Tangará da Serra (MT). 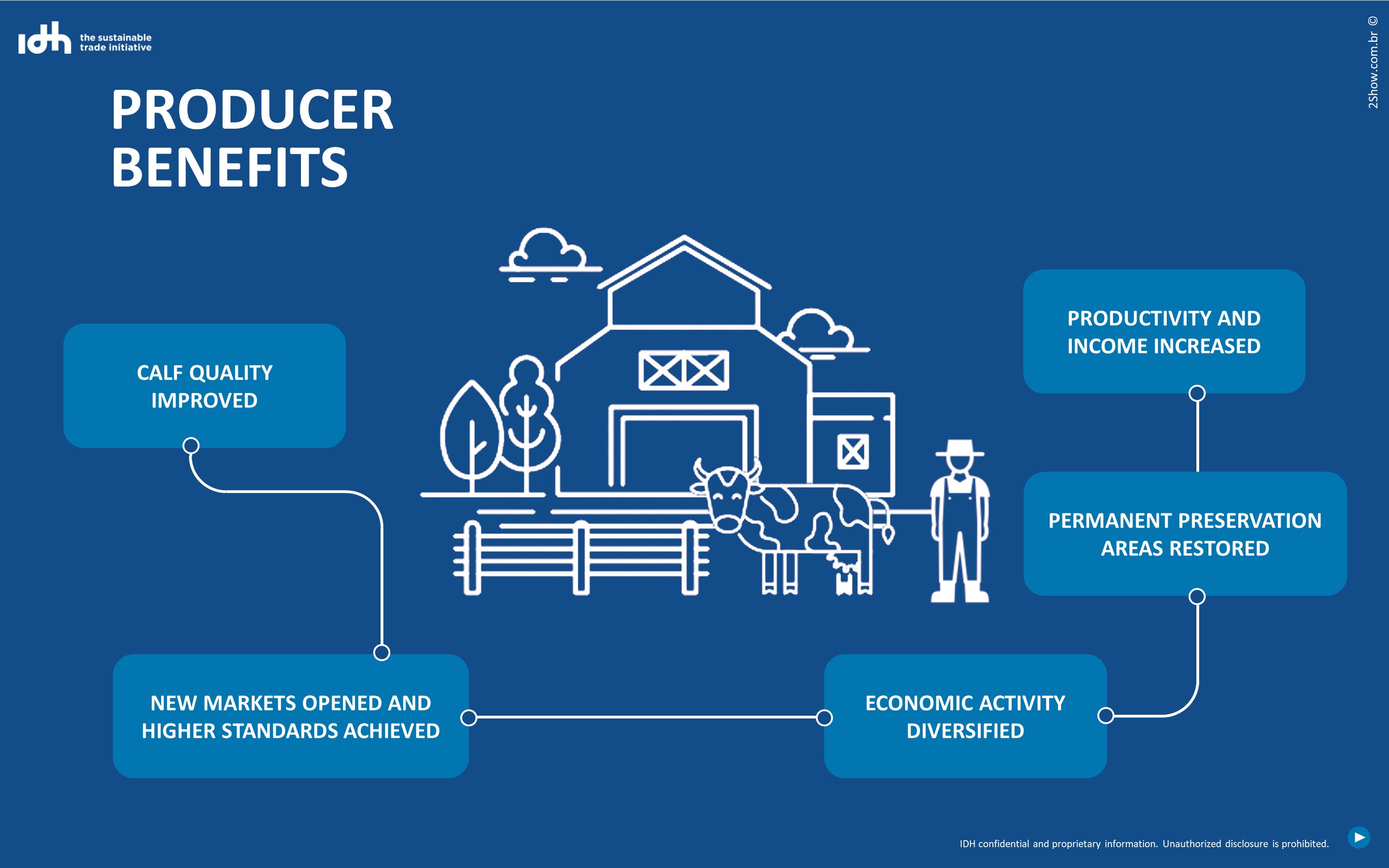 In July 2019, Marfrig issued its Sustainable Transition Bond, and a year later, it launched its Verde+ Plan to achieve a deforestation-free supply chain in the Cerrado and Amazon, becoming the first Brazilian meatpacker to publicly commit to engaging indirect suppliers in both biomes.

While the USD $500 million sustainable-transition bond provides the company with working capital to purchase deforestation-free cattle from the Amazon, Marfrig must create proof-of-concept to trace and extend no-deforestation policies to all of its suppliers. Based on this ambition, Marfrig and &Green started their engagement with the facilitation of IDH. The objective was to catalyze the full utilization of the transition bond through a sustainability-linked loan designed to fund the necessary supply-chain transformation.

Support Marfrig’s commitments related to transition to an inclusive, sustainable, and deforestation-free cattle supply chain in the Amazon and Cerrado biomes by:

A USD $30 million loan from &Green to Marfrig in Brazil

Enabling the utilization of USD $500 million raised in capital markets

By implementing &Green’s requirements, Marfrig can fulfil the sustainability conditions of its 2019 sustainable transition bond and de-risk the USD $500 million raised.

&Green’s financing is linked to two core documents to leverage Marfrig’s ambitions and build it further: the &Green Action Plan and the Landscape Protection Plan (LPP). Marfrig will use the &Green loan to implement these plans.

These two covenants were developed alongside Marfrig’s Verde+, a long-term plan co-designed by Marfrig and IDH, and the three plans are aligned in vision and scope.

Marfrig’s operations and supply-chain practices were assessed against the IFC Performance Standards. Due-diligence activities were completed by the Fund’s investment advisor and specialized independent experts.

According to &Green’s contractual obligations, Marfrig must deliver on the Environmental and Social Action Plan (ESAP) and LPP targets (accountable through third-party audits) – publicly sharing results. Lack of progress will be addressed based on contractually defined obligations and ramifications.

The loan’s pricing includes an incentive mechanism in the form of interest-rate discounts for anticipated compliance with traceability and compliance requirements for indirect suppliers in both biomes.

To support Marfrig, the Technical Assistance Facility is investing approximately EUR €100,000 in grants to pilot a project to support the remediation and reinsertion of direct suppliers compliant with legal requirements but non-compliant with Marfrig’s purchase policy. The pilot will afford the opportunity to reach compliance through restoration activities and thereafter towards inclusion in Marfrig’s supply chain. The pilot will:

Incorporating landscape strategies and the &Green Fund demonstrates a business case behind investing in landscape governance and the PPI strategy. A strong foundation of enabling conditions (e.g., PCI Strategy, Juruena Valley Compact, and the Sustainable Production of Calves Program) creates a favorable timing for this investment and all those still to come.

The coordinated investments from &Green to catalyze impact funding to foster innovative business models in jurisdictions where IDH is also investing grants to build sustainable commodities production at scale and landscape governance models show a complementarity to maximize the impact level for investors with lower-risk profiles.

For additional details about this transaction as well as IDH and &Green’s convergent strategies leading to &Green’s investment, you can read the publication here.

The &Green Fund aims to prove that financing agri-commodity operations, which are inclusive, sustainable, and deforestation-free, can be commercially viable and replicable. &Green seeks to support a market transformation of global supply chains by de-linking them from deforestation and producing a positive climate-change impact, while still feeding the world.

&Green can absorb higher, shorter, and medium-term risks and therefore, partially compensate its investees for the additional upfront project-development costs, particularly related to its environmental and social requirements. &Green offers loan or guarantee instruments with the capacity to provide long-term tenors. The pricing of investments is structured in a manner maintaining the Fund’s capital base over time by covering its risks and operating costs.