For each landscape in Liberia, IDH engages a partner to develop a spatial development plan on county level. This high-level plan envisions the spatial development of a county in a sustainable and holistic way considering factors such as forests, agricultural spaces, and wildlife corridors. This should be a guideline for all future interventions or investments that influence the land use in the county. To work out this high-level plan, IDH engages a local partner to develop the Participatory Land Use Plan (PLUP) on district level, which is one administrative level lower than the county. As a result, the PLUP is more detailed and specific to district characteristics, taking into account water use, land cover by vegetation, cultural traditions, community facilities and market linkages. 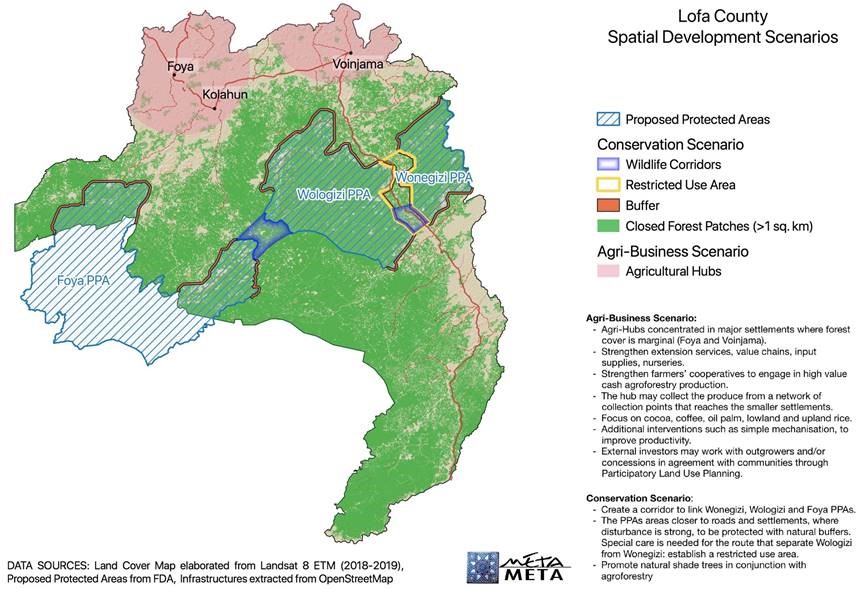 IDH operates in Lofa county, which is also the so-called ‘bread basket’ of Liberia. Lofa county is situated in North-West Liberia, where it borders Sierra Leone and Guinee and facilitates a lot of commercial dynamics in the region. Not surprisingly, the people in Lofa have an entrepreneurial mindset and actively participate in opportunities to enlarge their production.

This has been translated in their land use as currently most land in Lofa is being cultivated or – after many years of unsustainable agricultural practices – degraded to savannah grassland. This grassland is covered with elephant grass and allows for heavy winds and an increased fire risk.

IDH, together with cocoa company Theobroma (ECOM) started a pilot program in late 2018 to transform this grassland into cocoa agroforestry land. The pilot not only focuses on sustainable cocoa production, but also includes forest protection and restoration based on cooperation with the local community.  The two year pilot will end in 2020, and IDH and Theobroma are exploring possibilities to scale-up this project in 2021 as a sustainable business model.

Rice is eaten as breakfast, lunch and dinner in most Liberian households and thus a key component to the food security of Liberia. According to the Ministry of Commerce and Industries, an estimated 273,744 metric tons  of rice is being imported annually, accounting for over 200 million USD of annual imports expenditures. The ministry of Agriculture has recognized that lowland rice production has the highest growth margin.

Rice growing in Liberia is predominantly through shifting agriculture practices, which is a contributor to deforestation. In Foya, shifting agriculture is a major factor contributing to the spread of the grassland and the rapid the depletion of the forest, and should therefore shift towards lowland rice and vegetable production as means of reversing the trend.  Shifting from upland to a lowland farming system would significantly increase yields by double and allow for multiple farming cycles during a year through the use of irrigation systems.

In Foya, IDH collaborates with the Agricultural Infrastructural and Investment Company (AIIC) to engage more farmers in lowland farming and to renovate irrigation structures to increase the offtake of the rice farmers. This enables AIIC to increase the input for their processing machine, leading to a higher profit. The offtake is ensured by local school feeding programs.

Foya is one of the six districts in Lofa county and functions as Lofa’s agricultural hub. Although it offers quite some potential, the current land cover of Foya is degraded grassland. In order to increase the county’s agricultural production in a sustainable manner, as already expressed by different stakeholders in the Green Growth Plan of Lofa and the Participatory Land Use Plan of Foya, IDH convened a multi-stakeholder agreement during the summer of 2019, which laid the foundation for the future Production, Protection and Inclusion Compact for the district.

Diverse stakeholders have agreed to increase production, combat further land degradation, finalize customary land rights formalization, protect forests, attract private investments and to ensure development is made in an inclusive way. Targets for these objectives are formulated in the PLUP of Foya and should be monitored, evaluated and steered by the PPI compact governance board. Two private sector companies are contributing to this PPI compact. Theobroma is developing a scalable business model for cocoa agroforestry and the AIIC enhanced a new business model to increase its quantitative and qualitative production of rice.