In the 1970s the Liberian government signed an agreement with Agrimenco, an Israeli company, to produce rice and palm oil in the craggy forest on Liberia’s borders with Sierra Leone and Guinea.  Later, the company left, and the Liberia Produce Marketing Corporation (LPMC) took over its plantation, retaining the district’s bread basket status. But by 1989, the Liberian Civil War (1989-2003) broke out and the project was abandoned, leaving behind huge swathes of cleared forestland for the disposal of invasive savannah. 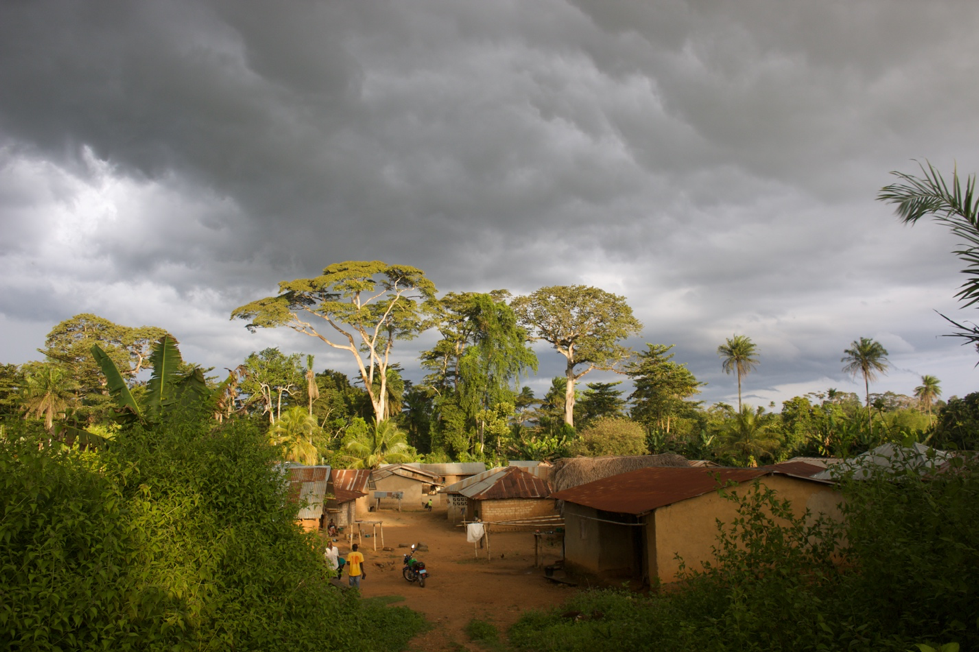 Farmers from Bambudu planting cocoa in the savannah to combat deforestation and climate change in Foya, Lofa County. The DayLight/James Harding Giahyue

While the savannah encroached on its once vast forestland, the 14-year conflict pillaged Foya’s infrastructure, and farmers cut down the remaining forest to farm and burn charcoal in the decades afterward. Then population growth and climate change added insult to injury with bushfires, floods, less water and more mouths to feed in this fabled Kissi countryside in the Liberian northwest.

But Foya is reversing its meltdown. A collaboration involving farmers, nongovernmental organizations, construction workers, community leaders, and local officials combines climate-resilient farming methods, replanting trees and a “law” on fire to banish its ghosts. They call it the Foya Production Protection and Inclusion (PPI) compact.

The turnaround began in 2018 after IDH conducted a land-use plan for the district, highlighting its agricultural potential but warning of dire consequences if villagers continue to cut down trees and watch the savannah spread across the land. Since then, farmers here have planted over 50,000 trees in areas once covered by the savannah and along riverbanks, cultivated acres of swampland, and have seen bushfire incidents reduce.

“I think we, in the not-too-distant future,  will regain our status as the breadbasket of Liberia,” Clarence Sandie, the Statutory District Superintendent of Foya, said at the launch of the project last year.

So far, the farmers have planted 20,166 trees on the banks of Wokanyah, a tributary of the Mayo River to prevent flooding, according to the Forestry Development Authority (FDA), which supervises the villagers. Two years ago, the stream broke its banks after a heavy downpour of rain for the very first time, destroying six homes in the Central Rankollie clan, authorities say. Farmers experience water shortage during the dry season, as the water level reduces, and the fish are disappearing.

“Most of the trees on the banks of the rivers were all cut down for charcoal production, such as the Makona River between Liberia and Guinea and the Mayo River that branches from the Makona River,” says Oliver Korboi of the (FDA). The trees are all aquatic, including uapaca, and cotton trees.

Farmers are involved in the replanting exercise at all stages. They have created the nurseries, nurtured and transplanted the young trees several miles along the Mayo River.

“I joined the project because it will help our farmers,” says Jenneh Korgor, a villager in Chaysenei, a town on the route to the Sierra Leonean border. “[The trees] help with shade and, I will always be part of this program if it continues.”

“It is very much important for us to have trees by the river for shade and to keep the forest to have more fish in the river,” says Justin Fayia, a villager in Menegisua in the Chaysenei area. He did not participate in the planting himself but asked his children to, and provided his farmland for the trees in nurseries.

Palm Plantation and agroforestry—where farmers plant cocoa and trees together to combat the savannah—are at the heart of the Foya’s resistance. The main idea is to encourage villagers to leave the natural forest and make their own woodland on the grassland, which covers 26 percent of the district’s territory.

Palm trees are characteristic of Foya’s agriculture profile. Before the war, LPMC ran the country’s largest palm oil mill here, serving as a market for hundreds of growers in the district. The farmers want to bring back those days. Forty-three of them in the Waum, Tengia and Rankollie clans have planted 6,400 palm trees, according to the Office of the Superintendent. “Freedom mills,” a locally made handheld device for making palm oil is driving the resurgence with double yields.

But cocoa farmers enjoy first preference over their palm counterparts because cocoa can grow alongside other crops and fits the idea of growing farms and forests at the same time, authorities say. Under this part of the project, 60 cocoa farmers have planted 22,952 seedlings on plots in the savannah, according to Robert Kettor, who liaises with farmers and the Office of the District Superintendent. The cocoa farmers have also benefited from 31,691 shade and fruit trees (avocados and orange) to transplant cocoa nurseries, Kettor says. Theobroma, a Liberian cocoa firm piloting the idea of growing the crop in the grassy areas, provided the seedings.

“Since we started, it has been a good project,” Emmanuel Morlu, a cocoa farmer in Bambudu, a village in the Lower Rankollie clan, tells The DayLight in an interview. “People embraced the work and we have been working. We saw it as beneficial to us because it is not only in the forest that we can grow cocoa.”

Not all aspects of the cocoa agroforestry program have been rosy, though. Farmers were reluctant when it was introduced in 2019 and now they are in a battle with the hostile grassland. Most of Morlu’s 5,500 cocoa seedlings are not thriving in the savannah, according to him, because of insufficient shade trees. Some of the shade trees he planted have not grown.

Morlu’s farm seems to be a battleground just as he puts it. Shrubs of young cocoa trees with yellowish and dried leaves are swamped and dwarfed by tall sunbaked, sugarcane-like grasses. He points to a stunted cocoa shrub, saying it was dying. He and other farmers are facing difficulties, as they are new to planting in the savannah, but says his mind is already made up.

“We are not going to go back to the forest. We have the knowledge already,” he tells me. “Also, it will help us reduce fire outbreaks.”

Bushfire has been another problem farmers here have had to face, even before the civil war. Fueled by the savannah, wildfire has destroyed farms in the region for decades, leaving local authorities grappling with a solution. In one of the worst incidences in March 2018, thousands of acres of farmland were destroyed in Kpandu and Kendema in the Tengia clan. Fifty acres of the FDA’s afforestation and reforestation plantation—established in 2011  as part of a 1986 scheme to fight the fire—were burnt. Some blame careless villagers and travelers. Others say climate change, which has led to prolonged dried seasons and patchy rainfalls nationwide.

So, a year later, local authorities, chiefs and elders passed the Fire “Control Constitution/Laws” after four years of review. Though it was not created by an act of the Legislature, authorities are enforcing it.

It prohibits people from traveling with fire during the dry season, smoking on highways and unauthorized burning of farms. It mandates every farmer to cut a 10-meter buffer—locally called fire lines—between their farms, the forest and other farms.  Violators face fines between L$1,500 and L$5,000.

There have been improvements, with just one fire outbreak in the last three years, according to Moses Sonjor, assistant statutory superintendent for development. “It is not an event,” says Sonjor. “I am really satisfied.”

Just as cocoa farmers are leaving the upland forest for the savannah land, so are rice farmers for swamplands. Years of poor farming practices did not only cut trees but also diminished the fertility of the district’s soil, according to the land-use study conducted by IDH, which works with the farmers to promote sustainable, community-centered agricultural investment in Liberia.

The swamp-rice program is quite ambitious. One thousand farmers are leading that shift to the wetlands, which make up 11.9 percent of Foya. The target is 10,000 farmers on 80 hectares of swampland, according to Kettor. They can produce three times a year, increasing their yield from 2.2 metric tons to 4.5 metric tons per acre a year, says Mohammed Kamara, the CEO of the Agricultural Infrastructural and Development Company (AIIC), which gives the farmers the rice seedlings. That is more than a 100 percent increment in their previous yield in montane forest. AIIC also assists the farmers in tilling the swamp and milling the rice they produce.

Wetlands have been used for agricultural purposes for thousands of years, helping to provide clean water, retaining soil and cycling nutrients. That is the case in Foya, too, just that that tradition bears scars of the civil war. Irrigation dams that stored and supplied water to the swamps were destroyed. Warehouses, including that of Intofawor—Liberia’s oldest cooperative—were looted. So were powerhouses that supplied electricity and factories that milled palm oil, cocoa beans and rice.

Now, with the help of IDH and AIIC, three of 10 damaged dams have been repaired and are functioning. The farmers have planted rice on 20 acres of swampland, with that expected to increase to 80 acres, Kettor says. The price of locally produced rice has dropped from L$3,500 to L$1,500 for a 25-kilogram bag, boosting local consumption.

The farmers The DayLight interviewed show no sign of fear that IDH, the investors, or local authorities will exploit them. Liberia’s history is replete with government-aided concessional land grabs that abuse the rights of local communities, destroyed their livelihood and take their land. However, the Production Protection Inclusion (PPI) project protects them. Though Teogbroma and AIIC provide them with cocoa and rice seedlings, the farmers are not compelled to sell their produce to the companies as per the terms of the project.  And all six clans in Foya have formalized ownership of their ancestral land, guaranteed in the Land Rights Act of 2018.

“We are teaching [our farmers] how to stand by themselves, to be self-sustainable,” says Kumbah Saah, chairperson of Foya Rural Women Cooperative of 52 women and four men, involved in cocoa, palm, rice and vegetable farming. “Everybody knows that we are fighting the savannah and climate change  for the sake of our children.”

This story was written by James Harding Giahyue and originally published in The Daylight.