The IDH Salary Matrix is developed to support, with practical tools, the efforts that you can use to bring transparency in supply chains regarding wages. It helps you evaluate how the total remuneration (including wages, bonuses, cash and in-kind benefits) compares to the relevant living wage benchmarks.

Before starting a Salary Matrix for the first time, we highly recommend watching the training videos below, and reviewing the Helpfile here.

How to use the Salary Matrix

To help you and your suppliers complete the Salary Matrix, please watch the instruction videos. These videos are also available in Spanish on the Spanish webpage, and the videos can be viewed in French here and here. 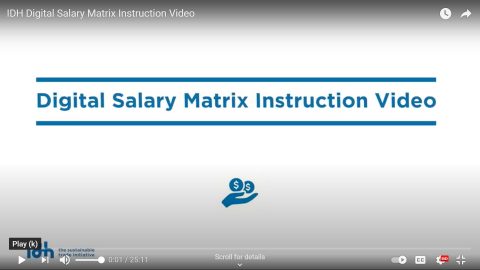 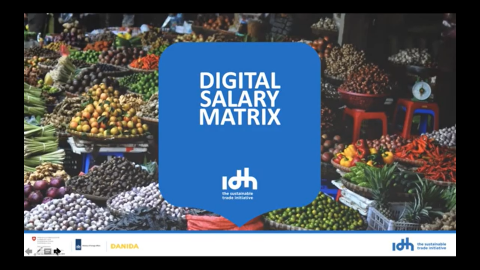 If you still have questions after watching the videos, we welcome you to sign up for one of the scheduled question and answer (Q&A) sessions.

We look forward to seeing you there.

Being a producer in a number of countries, Fyffes uses the digital Salary Matrix to calculate the current total remuneration of employees including bonuses and the value provided by in-kind benefits. This allows us to use a single harmonized tool to compare this remuneration with the applicable country living wage benchmark and easily identify gaps, if any. This information then can be used to find solutions in collaboration with all our internal and external stakeholders.

Read our case study on the Salary Matrix

2.1 How to roll out the Salary Matrix

The Salary Matrix has been used to measure living wage gaps in over a dozen countries and six agricultural sectors. Ongoing testing with manufacturing and production is being carried and further changes will make efforts to better reflect those sectors.

It is a tool that has proven useful for:

IDH believes that the only way prevailing wages can be measured accurately is by using tools like the Salary Matrix and that is why we launched it. Through this tool, companies can truly get a sense of what their own situation is vis-à-vis a living wage benchmark in the regions they produce.

The Salary Matrix closely follows and builds on guidance on calculating current wages to compare with Living Wage Benchmarks by leading Living Wage researchers, Martha and Richard Anker. Specifications for the Salary Matrix methodology were consulted with technical experts as part of the Technical Advisory Group. The tool has also been used by hundreds of producers and feedback has been and continues to be incorporated to improve the methodology.

The Salary Matrix was a tool originally developed by IDH and the Rainforest Alliance to address possible gaps between workers’ total remuneration packages and living wage recommendations. This Version 1 of the tool was published in December 2018 as part of the project ‘Next Steps in Sustainability: Measuring Impact and Assessing Living Wages’ in Costa Rica and Belize, based on findings from seven pilot farms that volunteered to better understand the value of their salaries, bonuses, and benefits.

In May 2019, IDH held a public consultation to further refine the tool. The valuable feedback from private sector partners, certification bodies, and others laid the foundation for improvements to help all supply chain actors take effective action towards living wage. With support from Fairtrade, Rainforest Alliance, and others, further pilot tests then took place between September 2019 and January 2020 — collecting data from the tea, banana, coffee, pineapple, and flower sector in eight countries. All feedback was reviewed by the Roadmap on Living Wages, an initiative launched by IDH in 2019 to enable companies to work on the definitions, tools, and approaches to living wages in a uniformed way.

In spring 2020, all members agreed on improvements to the Salary Matrix, which resulted in the publication of Version 2. Throughout the process, IDH has been leading supporting partners engaged in the testing of the tool — from organizing consultation meetings to compiling feedback, analysing recommendations, and identifying practical ways to incorporate them into an improved second version of the Salary Matrix. Based on Version 2, the Digital Salary Matrix is now the primary tool in use.

Click below to watch the instructional video on how to use the digital Salary Matrix. The tool is freely available and anyone can get started by making an account. 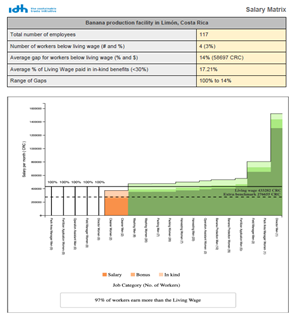 Upon completing the Salary Matrix, a user is presented with a final report. This report contains key information like the average size of the gap for workers below a living wage, as well as the number of workers below living wage and the total number of employees.

It also shows a comprehensive visual which displays all the job categories (or individual jobs) on the X axis, and the amount of remuneration, broken down by wages, bonuses, and in-kind benefits, on the Y axis. Job categories or workers earning more than the living wage are displayed in green while those below living wage are displayed in red. The horizontal line indicates the Living Wage Benchmark. A supplementary line for additional thresholds, such as minimum wage, may also be included in the graph if added by the user.

Additionally, the results include a complete table of the remuneration per job category.

Workers – The Salary Matrix measures remuneration for workers which can be listed individually or grouped into job categories. A job category consists of any group of employees who are paid the same base or piece-rate amount, in the same way, perform generally the same tasks and receive the same in-kind benefits. For example, if a group of workers all pick bananas and are paid $1 per box, they will be in the same job category. If some workers are paid $1 per box and others are paid $1.10 per box, they will be in two different job categories. Each Job Category can range in size from one singular worker up to 10% of the workforce as long as the previous requirements are met.

Standard Work Week Wages – Wages consist of gross wages earned during standard working hours (excluding overtime). Standard working hours are defined by the country or sector specific to the facility and are the number of hours before which overtime pay is mandatory by law. In countries where the standard work week surpasses ILO’s standard work week of 48 hours, the 48-hour workweek applies. To be earning a Living Wage, workers must be earning sufficient remuneration during a standard work week. Thus, there is no inclusion of overtime pay. Therefore, in cases were workers work more than 48h a week, the tool won’t consider the exact take-home pay but will only consider the wages earned in 48h and use this prorated wage to compare to the living wage.

Then, each hourly rate is multiplied by the standard work and by 4.35 weeks to represent a monthly figure.

It is important to consider that many facilities do not keep strict records of this information. This significantly limits the ability to confidently measure wages against the living wage benchmark: if hours are not properly tracked, this adjustment cannot be done accurately. For instance, most banana farms (with or without certifications) do not track the actual hours that employees work each day.

Also, some employment schemes avoid paying overtime by requiring workers to produce a certain amount before receiving any pay. When these productivity amounts are developed with workers or worker-representatives, there are likely labor violations that must be resolved.

Bonuses – Monthly or annual bonuses that are not mandatory by law but that employees can expect in advance and are regularly provided are included in the calculation of remuneration in the Salary Matrix. This includes additional pay given for high productivity and bonuses that are normally provided during the year such as end-of-year, 13th or 14th month, tenure and holiday bonuses. Profit sharing is not included. Bonuses are divided by the number of months worked in order to be compatible with the monthly value of wages.

In-kind benefits – In-kind benefits are only considered as remuneration if they are accepted by workers as being valuable, directly reduce the cost of basic living for a worker, are provided during regular working hours, are regularly provided, are expected in advance, and are not mandatory by law. Such in-kind benefits include food, transportation, family housing, healthcare, children’s education, and childcare.

The Salary Matrix values in-kind benefits based on the total cost to the employer for providing the benefit to all workers who receive the benefit. If the workers must pay a subsidy for the benefit, this amount should be removed from the total. The remaining cost to the employer is divided by the number of workers in the job category. This calculation is done automatically in the “Job categories that receive in-kind benefits” section, rather than by the user.

Read more about which in-kind benefits can be included in the Salary Matrix.

IDH will be the only organization with access to your data and we will keep this information under strict confidentiality as indicated in the disclaimer when you register for the use of this tool. IDH is a non-profit international organization that seeks to improve and scale up sustainable production and trade to deliver large scale impact on the Sustainable Development Goals. The information entered in the online version of the Salary Matrix will remain confidential: your name, the name of your company, and anything that could possibly identify your company will never be revealed. IDH may publish only aggregated reports which will use aggregated information (never individual facility data) to analyse living wage gaps across the world, trends and progress ,but will never disclose any individual data associated with a given user.

IDH believes that the only way prevailing wages can be measured accurately is by using tools like the Salary Matrix and that is why we launched it. Through this tool, individual companies can truly get a sense of what their own situation is vis-à-vis a living wage benchmark in the regions they produce. Currently, there are no other tools that calculate workers’ remuneration to compare with living wage benchmarks.

For certain sectors in certain countries, prevailing wage data may be available. While this may be useful to have a preliminary understanding of wages for the sector, it cannot be used in place of the Salary Matrix to measure wages to compare with living wage for several reasons. Prevailing wage information is often season specific and do not fully captures what workers are earning during the full year of production. Also, it often focuses on one job category, such as the lowest paid workers, and does not include all workers in a facility. Most importantly, prevailing wage data often does not specify hours worked or adjust to the standard work week which is essential for comparing against living wage benchmarks. Prevailing wage data is also general, and not specific to a facility which may pay more or less than sector or country prevailing wages.

Wage information from Collective Bargaining Agreements (CBAs) may also be available and informative. However, it does not include sufficient detail to understand workers’ actual take home pay or value of received in-kind benefits.

Comments or questions about the Salary Matrix can be sent to livingwagematrix@idhtrade.org.