After a period of suspense, we are pleased to inform you that Jonas Mva Mva has returned to the IDH cocoa team as Program Director.

During his one and a half year absence from IDH, Jonas has been the Sustainability Director at Cemoi Group, where he developed and launched the Transparence Cacao Program. Although he celebrates a fruitful period at Cemoi, Jonas is also excited to be back at IDH, ‘rejoining the family’. Born in Cameroon, Jonas grew up on his grandfather’s cocoa farm; in his words he was ‘literally born under a cocoa tree.’ Jonas has over 30 years of experience in the cocoa sector, four of which previously spent with IDH. He is known as someone who celebrates and is driven by the entrepreneurial cocoa farmer, which is one of the many reasons we are so excited to have him back at IDH! 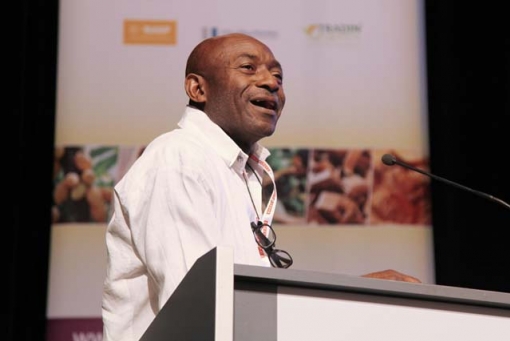 Another recent addition to the IDH cocoa team is Simplice Chigbo who began, working in Côte d’Ivoire in early June, as the Program Leader of our Farm & Coop Investment Program (more details about its launch can be found on our website). Apart from his background in social investment at Root Capital, Simplice also has extensive knowledge of the Ivorian cocoa sector. Combining his experiences, he will be building the bridge between the finance sector and the private sector, in order to facilitate agri-lending to cocoa producers.

With the addition of Jonas and Simplice, our cocoa team is up and running at full steam. In Côte d’Ivoire, Simplice is working alongside Renske Aarnoudse (Country Manager) and Laetitia Aney (Program Officer), who oversee both our local landscapes program and the Cocoa Fertilizer Initiative. In Indonesia, Pak Imam Suharto (Country Manager for cocoa and coffee) chairs the Supervisory Board of CSP and is supported locally by Melati (Program Officer). In the Netherlands, Nienke Keen (Program Officer) provides  support for Jonas in the overall management of the program and in particular oversees the nutrition work stream.