The beginning of the driest period of the year in the central-western and north-eastern regions of Brazil brings with it concerns about rural fires, which are becoming more common due to low air unity and the accumulation of combustible material. This situation puts owners of farms on alert and mobilizes farmers to engage in fire-fighting actions, as the occurrence of fires is not only a threat to production in the field. In addition to material damage, fire causes environmental and social problems, as it worsens air quality for everyone.

In order to act preventively, institutions that are signatories to the Produce, Conserve, and Include Compacts in Mato Grosso and Maranhão have engaged in campaigns to raise awareness, prevent, and fight fires.

In Sorriso, Mato Grosso, CAT, together with several other local institutions, is part of a task force whose actions, which have already started, include training and capacity building on farms, educational and communication campaigns, as well as meetings with social institutions. 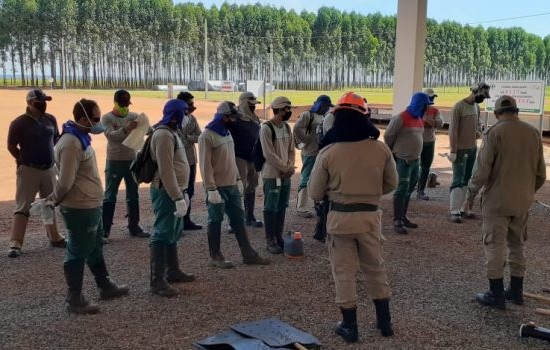 The president of CAT Sorriso, Dudy Paiva, knows the problem up close. In 2020, the family farm, which is RTRS certified and considered a showcase of sustainable production, was hit by fire that destroyed 90% of their property. “Unfortunately, this was not an isolated situation. Other farmers were also victims of the uncontrolled fire in this period of drought. This is why everyone’s awareness is essential for us to fight forest fires because problems are countless both from a financial and environmental standpoint, as well as with regard to health”, he warns.

One of the key points of the campaign is the training of teams on the farms, such as the one carried out at Fazenda Centro da Mata. (Check out more details about the campaign  by clicking here)

In the same sense, Fapcen, the implementer of the PCI Compact in 12 municipalities in the Balsas region, is involved in the “Maranhão Sem Queimadas 2021” (Wildfire-Free Maranhão 2021) campaign, promoted by the State Government, with the support of several other institutions. The campaign also aims to provide training to prevent and combat fires, including a “Situation Room on forest fires.

Fapcen’s superintendent, Gisela Introvini, highlighted that one of the goals of the Balsas Region Compact is to support actions to reduce fires by up to 50% by 2025. “Further strengthening the existing partnership between Fapcen with the 4th Battalion of Balsas Fire Department, firefighting equipment were donated, and awareness actions have also been carried out through the continuity of training and lectures in the different events promoted by the institution, thus enabling the achievement of the goal proposed in the Regional Compact of Balsas with total success, “he explained.

“The regions of Sorriso and Balsas are important hubs of agricultural production in the country, hence prevention actions are essential, and it is important to highlight that farmers are the ones most interested in preventing such problem from happening. We congratulate the organizations, governments and farmers involved and we continue to provide our support to promote the sustainable development of these territories”, says Daniela Mariuzzo, IDH Brazil Executive Director.