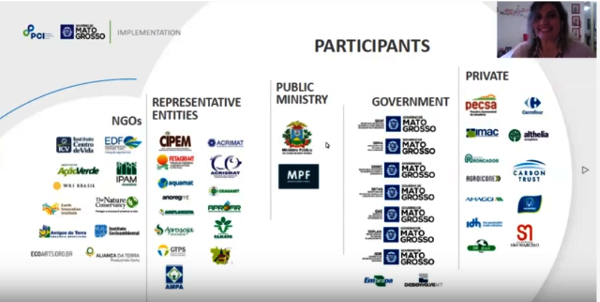 The event featured a timeline since the launch of the Strategy, in 2015 at the Cop21 (Paris), with details on the origin, how it was developed, the roles of the main partners, the current governance model, the measurement of progress in relation to objectives set and the next challenges. Also, they presented concrete examples of private sector involvement in territorial initiatives and how PCI ensures synergies with other platforms, such as the VSA – Verified Sourcing Areas.

The Executive Director of the PCI Institute, Fernando Sampaio, explained how the strategy contributed to reduce the pressure on the conversion of native vegetation for the production of commodities, such as soybeans and meat, for example, in a global dynamic that anticipates the increase in food consumption. He mentioned that Mato Grosso can meet this growing demand, for it is one of the most important agricultural regions in Brazil and, at the same time, focus on the conservation of forest cover, as well as on small production chains. “The issue of how to respond to this trend sustainably is essential and the PCI is a new governance and development model that brings positive results”, he said.

Daniel Nepstad, from the Earth Innovation Institute, pointed out that Mato Grosso has evidenced a number of innovations in recent years with regard to environmental governance policies, having been one of the pioneering states also in receiving international resources in recognition of the drop in deforestation rates. According to him, the involvement of the productive sector was key for the success of PCI. “This has made it possible to reduce the tension between the environmental sector and industry, which, historically, has been a barrier for the progress in developing similar initiatives”, he stated.

The long road between the launch of the Strategy at Cop21 in Paris, until reaching the current results involved huge efforts and investments in building dialogue between NGOs, farmers, communities and traditional populations, companies and the government. “This has created an environment of trust, which allowed the engagement of the actors for the establishment of the PCI”, said Daniela Mariuzzo.

During the event, they also presented the structuring steps that enabled the continuity of the Strategy, despite the scenario of political transition scenario of the State in 2018/2019 and which has allowed it to evolve, with the creation of the PCI Institute.

As for the next steps, they showed the need to continue implementing the Institute’s Action Plan 2020, which is grounded on core pillars, including the administrative structure, defining priority actions for attracting investments, monitoring the objectives and goals established, regionalizing the Strategy and communication actions to ensure visibility and credibility. To this end, the engagement of companies is considered a key point that can be achieved, for example, through the creation of Verified Sourcing Areas (VSA).

Fabíola Zerbini, Regional Director of TFA for Latin America, concluded by pointing out that this is an ongoing process. “We invite everyone to join us in this dialogue and construction process”.

You can watch the event in English here