Advans SA SICAR is a venture capital investment company created in August 2005 by Advans International (formerly Horus Development Finance). Its mission: to respond to the need for financial services felt by micro-, small-, and medium-sized enterprises and other populations that have ill-adapted, limited, or no access to formal financial services. By providing tailored financial services in a sustainable and responsible manner, the Advans Group aims to build a model group of financial institutions that contribute to strengthening local businesses in developing and emerging economies.

Advans CI (Côte d’Ivoire) was the fifth greenfield micro-finance institution established by Advans SA. As a member of the wider Advans network, Advans CI benefits from the technical capacity to grow quickly and sustainably—building its products and packages on the knowledge accumulated by Advans SA since its inception.

Advans CI identified an opportunity to develop financial products for the Ivorian cocoa sector. Côte d’Ivoire is the largest global producer and exporter of cocoa beans: and yet the 625,000 smallholder farmers who represent 90 % of the country’s total production experience very low yields (400 kg/ha compared to 670 kg/ha in Indonesia and 1,400 kg/ha in Malaysia). Around 450,000 tons of fertilizer are needed annually. The prohibitive cost of fertilizer (around 60 % of a farmer’s gross revenue per untreated hectare) meant that consumption stood at less than 10 % in 2012—around 40,000 tons of fertilizer were used by Ivorian farmers during this year. This presented a significant potential demand for input credit, alongside a demand for other products such as deposit products and equipment credit.

The perceived risk of agricultural lending meant there was almost no competition in the sector. Advans CI was the first bank in Côte d’Ivoire to offer financial products to smallholder farmers. In November 2012 a partnership was established with TechnoServe and IDH through the Cocoa Livelihoods Program (CLP), led by the World Cocoa Foundation, which was working to increase the incomes of cocoa farming households in West Africa. The role of Advans CI was to provide access to financial services and to transfer the knowledge built in Côte d’Ivoire to Advans Ghana in order to replicate the project with Ghanaian cocoa farmers. 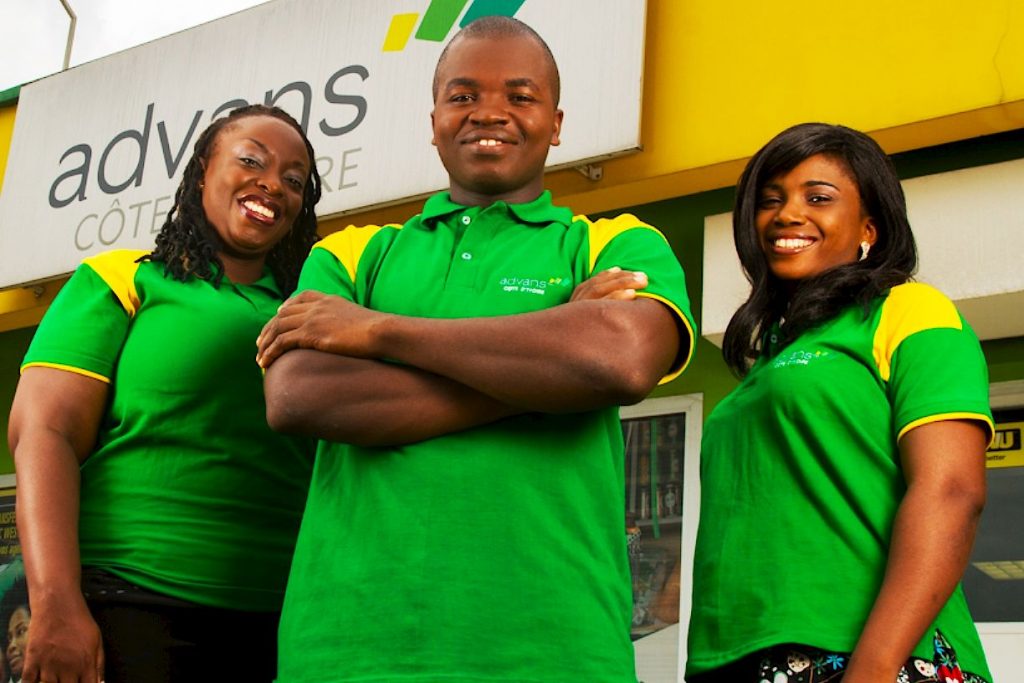 Advans SA is an investor, which gives it a double-bottom-line objective: contributing to economic development and poverty alleviation while offering a decent financial return to its shareholders. Together, IDH and Advans CI have demonstrated a successful model of financing that is more commercially viable than the sector had anticipated. In fact, Advans CI considers its cocoa portfolio as its core agricultural activity and expects to maintain a high pace of growth and innovation.

The Advans model is relevant and attractive to traders, with six companies now participating in the input credit scheme. The portfolio was initially planned to include fertilizer and phytosanitary products: ultimately, the majority of credit has been provided for fertilizer. Advans CI has provided training on producer credit management and credit policy (how to select producers, how to define a repayment schedule, etc) to reduce the risk of payment default.

Advans CI’s market share is around 30 %: the company considers there is still a lot of potential for growing the portfolio. The productivity and risk management secured through the use of the value chain for distribution and repayment (see The Cocoa Loan: designing financial products that work for the sector, in this chapter) will enable Advans CI to launch less productive and more risky products while maintaining a high-quality loan portfolio.

Now Advans CI seeks to develop alternative delivery channels to reach farmers (such as mobile money agent networks). It is looking to develop a better understanding of farmer heterogeneity—number of people in the household, size of the farm, cocoa delivery capacity etc—in order to shift away from a one-size-fits-all financial product to offering products adapted to individual farmers. And it is investigating ways to improve data capture so it can increase staff productivity, improve credit risk management, reduce costs, and share information among partners.

Many of Advans CI’s cocoa-sector partners are also active in other sectors (traders, NGOs, input suppliers, etc) and some have approached Advans CI to discuss starting pilot credit schemes for other crops. As Advans CI has reached breakeven point in its cocoa financing, the company is now ready to expand its offer to other value chains in Côte d’Ivoire.

Discover the stories behind five years of partnership with CPQP

The Cocoa Loan: designing financial products that work for the sector

During a three-year pilot phase (2013–2015), funding was provided by IDH (and other donors) to Advans CI for operational and refinancing costs up to breakeven point. This enabled the company to build an understanding of the cocoa production cycle, identify the cash flow of farmers throughout the year to know when to offer different financial products, and train co-ops on its institutional procedures. Advans CI created a new loan product, the ‘Cocoa Loan’, which offered lower interest rates to co-ops participating in the Cocoa Livelihoods Program (CLP).

The Cocoa Loan works to a structure that follows the production cycle. In January, Advans CI, TechnoServe, and exporters identify co-ops that are eligible for CLP. In March, the input needs of the selected co-ops are identified. In April, Advans CI evaluates these needs and pays input suppliers according to the volume of credit it has approved. In May, the input suppliers deliver the inputs. Farmers are trained (by TechnoServe and the input supplier) on their correct use. From September to March, co-ops collect members’ harvested cocoa and deliver it to the exporters. The exporters pay the co-ops on delivery and deduct the loan instalments on Advans CI’s behalf, until the loan is completely repaid. Farmers are offered a grace period of at least four months, and enjoy flexible repayment schedules.

The cocoa portfolio was highly successful and performance exceeded expectations. The pilot project provided EUR 2,421,945 of input credit (97 % fertilizer and 3 % phytosanitary treatments) to 10,830 farmers through 81 co-ops, with a repayment rate of 100 % over the first three years at co-op level and 95 % on average at farmer level.

The original plan for the Cocoa Loan was that exporters would mitigate the risk for Advans CI by introducing the company to cocoa co-ops and serving as a guarantor in case of loan default. However, in practice, Advans CI quickly developed the capacity to build relationships with new co-ops and achieved high growth by expanding input credit to co-ops outside of the Cocoa Livelihoods Program in 2014. Advans CI found it could take on more risk than anticipated and increased its risk share from 35 % in 2013 to 70 % in 2015. Input providers Yara and LDC saw the opportunity to develop the cocoa market and came on board for part of the risk. In this way, risk sharing with exporters was no longer needed.

In this ‘outside CLP’ mechanism, neither TechnoServe nor the traders were involved and the repayment was made directly by the co-ops to Advans CI. In March 2015, repayment rates were 100 % on both schemes (direct repayments to Advans CI and repayments through traders’ deductions), which confirmed the relevancy of the ‘direct loan’ strategy and the strong capacity of Advans CI to implement new schemes in an efficient and sustainable way. As a result, Advans CI is now able to offer more flexibility to co-ops and adapt its repayment schedule to the specific situation of each co-op.

Advans CI has been willing to take on the risk of working with significant numbers of co-ops to achieve good social outcomes. While efforts to build the capacity and bankability of co-ops are still underway, exporters are careful not to over-burden co-ops with debt—particularly where co-ops have agreements with Advans CI for inputs and separate agreements with exporters for warehousing, equipment, cocoa purchase loans, and other needs.