The “Global village” of today’s world is based on global economic integration. There is a clear need for a holistic strategy that integrates international market access, smallholder incomes, and committed buyers for large sourcing areas.

“Fragmented production landscapes” were found to be the biggest challenge to the agriculture sector of Dak Lak Province at a trade fair held with the PPI Compact of Krong Nang District, Central Highlands, Vietnam on 30 September 2020. Mr. Y Giang Gry Nie Knong, Vice Chairman of Dak Lak People’s Committee, said: “The landscape is broken into smaller and isolated patches. This situation is happening to 80% of the province’s agricultural land. Organizing farmers into production groups or professional associations or cooperatives is another challenge.” The trade fair was hosted by a partnership of the Compact, comprising of the local authority, IDH, JDE, and SIMEXCO.

Mr. Cao Hoai Duong, Director of Dak Lak Department of Agriculture and Rural Development (DARD), emphasized the importance of establishing farmers’ groups or cooperatives: “This helps farmers to better access the market as they can ensure the quality and quantity of products committed to the buyers. They can ensure the traceability of their products. However, the percentage of farmers that join groups or cooperatives is relatively low.”

As a result, smallholder farmers often have problems sustainably and effectively accessing markets. Mr. Cao Hoai Duong highlighted the pilot of the Verified Sourcing Area (VSA) implemented by IDH – The Sustainable Trade Initiative in a partnership with the local authority of Krong Nang District, JDE, SIMEXCO, coffee companies, and farmers as a “good example” in dealing with such issues. The success of the pilot is demonstrated by the mutual decision to expand the area, currently covering 5,000 hectares of the district, to 10,000 hectares in the near future. A recent evaluation also showed that the income of farmers in the PPI Compact has increased by 30% compared with farmers outside of the intervention area. Intercropping is mainly attributed to this increase. 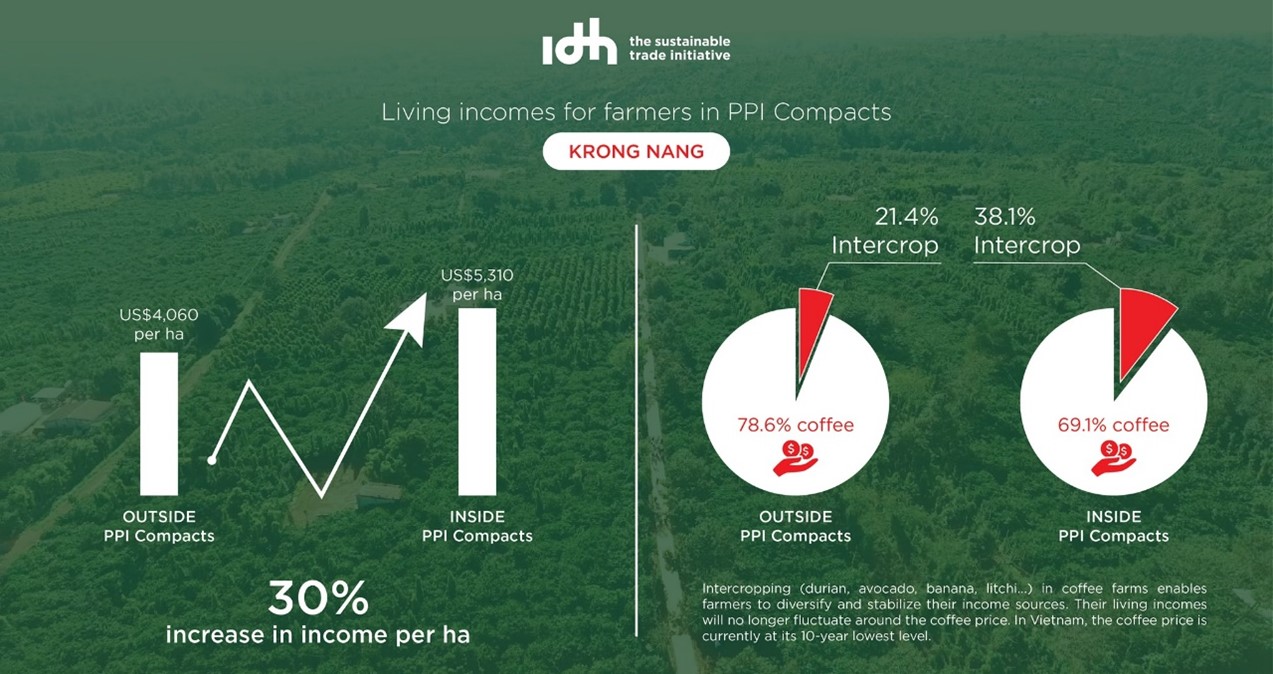 As a result of the pilot, the provincial leader has agreed with a proposal set by IDH to develop a provincial-level policy that facilitates the replication of the model to other districts in the province. “It is a good model and we agree to replicate it,” said DARD Director.

At the event, a number of Memorandum of Understanding (MoU) agreements were signed between private partners and cooperatives of farmers. These partners will procure fruits from the PPI Compacts in which intercropping is practiced. In the coffee sector, the local authority, IDH, JDE, and SIMEXCO signed an MoU to related to controlling the use of weed killers with Glyphosate to meet strict EU market requirements.

“For almost ten years, all coffee products originating from our production areas in Krong Nang district have always met the market requirement of Glyphosate residue,” said Mr. Nguyen Tien Dung, Sustainability Manager of SIMEXCO. “In contrast, other provinces of the Central Highland are struggling with the issue. I attribute this success to the fruitful partnership with IDH, JDE, local authority, and especially farmers. JDE is our committed buyers.”

The PPI Compact of Krong Nang District was officially implemented in early 2019. This was the next phase of a pilot that IDH had initiated in the district in 2013.