Interview with Hans Docter: ‘I’m glad the issues around living wage and living income are high on the agenda now’

Interview by Daan de Wit with Hans Docter, Ambassador for Private Sector and Development and Director for Sustainable Economic Development at the Dutch Ministry of Foreign Affairs. 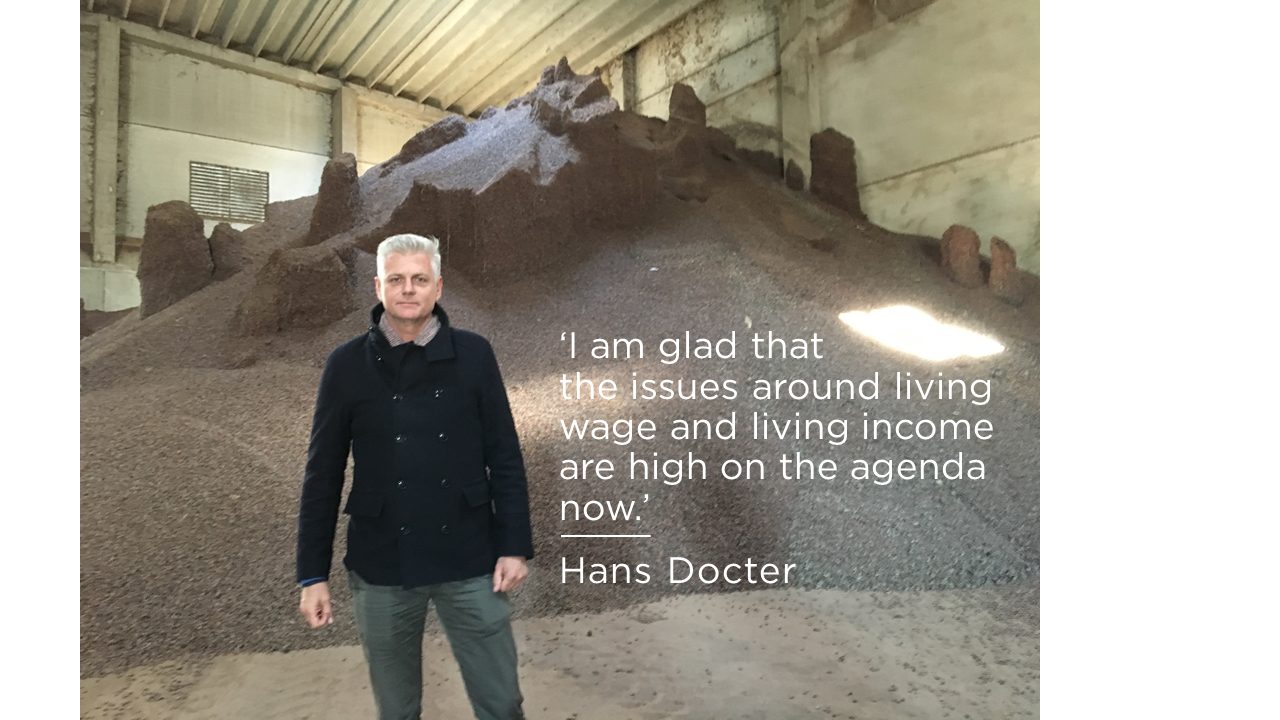 After four years Hans Docter is leaving his post as Ambassador for Private sector and Development and Director for Sustainable Economic Development at the Dutch Ministry of Foreign Affairs. How does he look back on four years of public private partnerships and how does he value the role of IDH?

We are in a cocoa storage facility in the port of Amsterdam, the largest cocoa harbor in the world, facing a huge pile of cocoa beans. As former Ambassador of Ghana Hans Docter feels “at home” here: ‘This storage facility looks very similar to the ones I’ve seen in Ghana.’ We stroll along the cocoa harbor, reflecting on the results of the Sustainable Development policy of the Dutch government under his leadership, and the changing role of companies and other players in the value chain.

We are looking at a huge pile of cocoa beans. Why is cocoa important to the Dutch Ministry?
‘From a development perspective cocoa production is a very interesting commodity. We import huge quantities of cocoa, so for the Netherlands it is important that such value chains are stable. Often cocoa is produced in poor countries facing two big problems: cocoa farmers and producers don’t earn a decent wage, and deforestation related to cocoa production continues. These two problems are closely related: when farmers don’t earn enough money with what they produce on their land, they will look for other ways to make enough money to feed their family. This could be encroaching in the forests surrounding their farms. You can’t cherry pick a problem and solve just one part, for example deforestation, you need to look at the bigger picture. So that’s what we’re doing in the cocoa sector: we find a way to create value chains that are profitable for everyone.’

What do you see as the most important factor to make sustainability in value chains work?
‘The whole sector, governments and civil society, everybody has to have a real urgency. Enough is enough. Working towards that urgency and building the common ground is a key role for us as a government, but also for organizations like IDH.’

You often hear, the Netherlands is small. Things need to be organized on a larger scale. What are your thoughts on closer European cooperation on trade, and what’s the role of the Netherlands?
‘As the Dutch government we are pushing for this. We are a trading economy, sourcing globally. Through global value chains we are also connected to global issues. It’s only natural for a country like the Netherlands to get active on this agenda and push for changes. On the other hand, while we have a strong economy, we are definitely not the biggest in the world. We need a coalition of allies. The European level is definitely the first goal. We are actively working with countries like Germany, Belgium, France and others and we really hope that the new European Commission will take a more pro-active role in this and come to a common European approach.’

I think those who make the biggest effort should make the most money. To me it’s clear that the farmers do most of the work and should be paid more.

If you look back on the past 4 years, what are some big changes you’ve seen?
‘I’m glad that the issues around living wage and living income are high on the agenda. This is motivating a lot of people to ensure that people who are working in the value chain make a decent income. It’s very important to look at how value is distributed along the chain and I think those who make the biggest efforts are the most important players in the chain and should make the most money. To me it’s clear that the farmers do most of the work and should be paid more. That is an issue that we collectively have to work on.’

‘Another change I see is that a lot of companies are becoming more and more involved in working towards solutions. They come up with ideas and finance these as well in many cases, so we are increasingly making progress in terms of engagement. Have we solved all the problems? No, we still have to do a lot, but we now have a big coalition of companies, civil society, governments, and people who really want to tackle these issues. That’s a good base for the future.’

When you reflect on the work of IDH, what would you give for advice?
‘IDH did many things right. A lot of the work in value chains really changed the farmers’ and workers’ lives and IDH has been very good at bringing a lot of companies together to work toward the same goal. But in that cooperation, you can sometimes be a bit tougher. Especially now that everybody is on board and shares the same values. It’s up to you to challenge everyone in the partnership and say: “Let’s go the extra mile. You may not like it but it’s the right way to go”. I think that that would be a good role for IDH to play. When we talk about living wage and prices, I think this is the most pressing issue and also one of common humanity that people can rally around. That is something we can push for to realize sooner than we originally agreed to.’

I think IDH should be more innovative, disruptive even. I see that things have changed, but there is no fundamental system change happening yet.

‘IDH is picking up on this already but can push companies and governments harder. It’s also local governments that have a role to play to ensure that this happens sooner rather than later. I think IDH can and should be more innovative, disruptive even. In my opinion I see that things have changed, but there is no fundamental system change happening yet. Pushing for innovative solutions that have the potential to change the way commodities are produced, traded and consumed is what I hope to see more.’

If it were up to you, what would you change about the way prices are organized?
‘It is about a fair price for fair effort and that is something that the market needs to accept. I don’t believe in western governments setting prices or conditions, it’s a better approach to calculate all elements of production -including a fair wage and environmental costs – and include them in the price. By doing this you make the ‘hidden costs’ visible. That kind of approach is something that IDH works on, to make visible what we are not paying when we are sourcing products. The market needs to understand that it is important to pay that price. Next to that, farmers need to organize themselves in such a way that they can demand a better price. It depends on who has the power to determine the price.’

Final words for companies?
‘Don’t be penny wise and pound foolish. If you want to be in business 20 years from now, invest in the future of your value chain by paying the fair price that takes into account all the costs necessary to continue your business.’