On 23 September 2020, a high-level stakeholder engagement forum that aimed to connect the Cocoa & Forests Initiative (CFI) commitments to landscape stakeholders and to emphasize the urgency for engagement with CFI at landscape level took place in the Ahafo region in Ghana. This was the first of a planned series of forums that will be convened in 4 Hotspot Intervention Areas (HIA) (or priority landscapes).

Creating CFI activities at landscape level and collaboration across sectors was agreed to be essential to the mutual goal of stakeholders to protect and restore degraded forest in Ghana. Michael Marboah, Sustainable Landscape Manager Touton, stressed that, “we are all involved in this, if we don’t act the consequences will be on all of us.”

During the forum, the Secretariat provided key updates on the progress of CFI Implementation so far and explained relevant CFI core commitments and their benefits for landscape stakeholders. The Secretariat were also receptive to the landscape stakeholders’ advice on how communication for community level sensitization could be best approached, thus emphasizing the intrinsic role that communities play in forest protection.

The meeting was chaired by the Paramount Chief of the Goaso Traditional Area, Nana Kwasi Bosomprah I, and featured a speech from the Regional Minister, Hon. Evans Opoku Bobie, delivered on his behalf by the Municipal Chief Executive (MCE) of Asunafo-North. The speech highlighted the important role that forests play in providing ecosystem services and that their conservation and protection is paramount. The MCE encouraged participants to take advantage of the forum as an opportunity to understand the issue of forest protection and sustainable cocoa production as a shared responsibility by all.

The forum was the first of its kind in which a cross section of relevant high-level landscape stakeholders were engaged to deliberate on which roles and responsibilities they must play in supporting the CFI initiative at landscape level. Stakeholders expressed their willingness and readiness to play different roles in terms of being “brand ambassadors”, resource figures and in providing the tools/mediums of communication to reach out to larger groups of cocoa farmers within the cocoa growing communities.

The Municipal Director of Education, Margaret Buobo, described the important role that education plays in preventing deforestation, “We have several subjects that deal with the environment, including the forest. We are teaching the children and let them understand the need for them to prevent the depletion of our forests.”

Alongside this, Traditional Authorities stated that:

We can play a significant role in halting deforestation within the jurisdiction by way of strengthening the coordination between Forestry Commission, Security forces and the Traditional authorities.

There was also warning from the Regional Fire Office, as an officer claimed:

We have quite a number of Fire Volunteers in this HIA (priority landscape) who have been trained but we lack the support to effectively create community awareness and there is the urgent need for logistics to sustain motivation, hence our few forest reserves are at risk from wild fire.

At the end of the forum, the CFI Secretariat team were confident that participants gained a concrete understanding of their role within CFI and were of mutual agreement that this must be leveraged in order to reach out to the communities. Within the Traditional Authorities, this will involve community meetings led by the local chief in which he will ensure that CFI activities become understood as beneficial to the forest and the community. For agriculture officers, they will organise their own internal forums whereby issues connected to cocoa deforestation will be put at the forefront.

The next three Landscape Level Forums are planned to each have an average of 50 key landscape stakeholders in attendance and will be held during October-November in the priority landscapes of Kakum, Ahafo-Ano South/ Atwima Mponua/Atwima Nwabiagya, and Atiwa/East Akim/Dekyembour. These forums will continue to drive forward the message of the first: to connect CFI core commitments to the landscape level, to highlight relevant engagement activities, and to leverage appropriate channels for disseminating information on cocoa-related deforestation in each region.

Watch the short video below to see highlights from the forum. 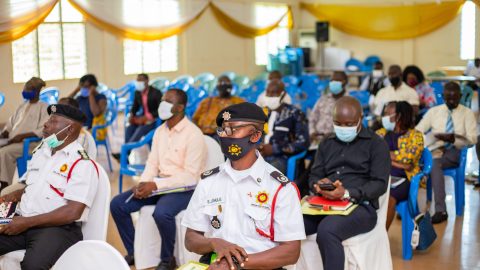