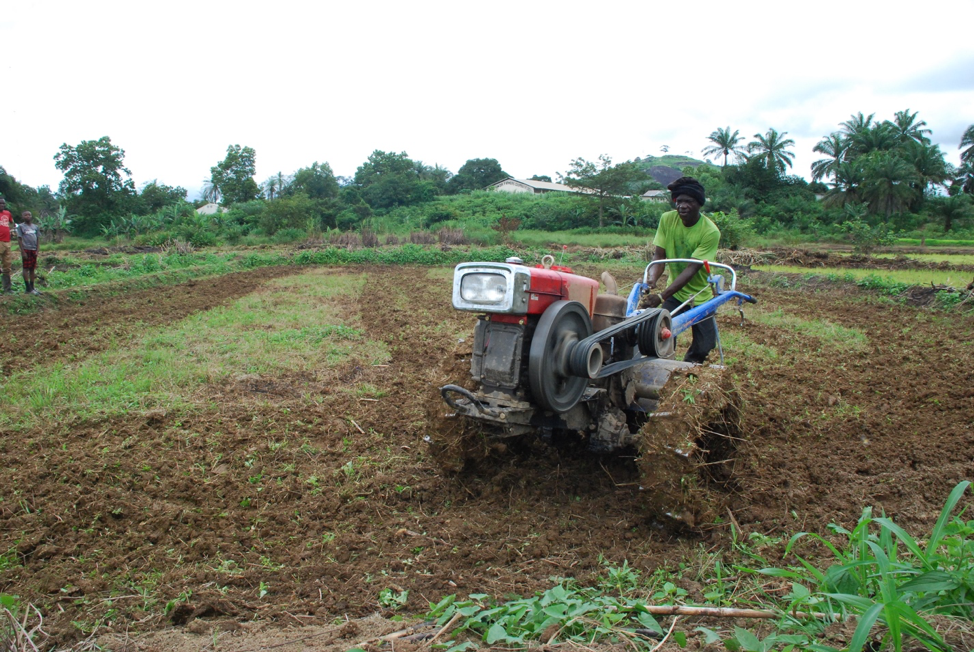 A technician uses a motorized tiller on swampland in Foya, Lofa County. The DayLight/James Harding Giahyue

The Foya Statutory District Production Protection and Inclusion Compact (PPI) is an agreement among Foya District, the Agriculture Infrastructure and Investment Company (AIIC), three local farmers’ cooperatives, the Community Rights Support Facility and IDH – the Sustainable Trade Initiative. This is the first time such a deal has been sealed in Liberia, a country whose concession history dates as far back as the 1920s.

“We now have the foundation, and we must build on that foundation. That requires commitment from you, the people,” said Silas Siakor, the country representative of IDH, the convener of the pact, during the memorandum of understanding ceremony recently. “The only benefit we will from here today is if we implement the agreement.”

“This is first of its kind to integrate the local communities into the decision-making, planning and implementation process of a project,” said Clarence Sandie, Foya District’s Statutory Superintendent at the ceremony.

“I am so thrilled by this compact,” said Moses Sonjor, Assistant Statutory Superintendent for Development.

The agreement follows a 2019 resolution of the parties to improve sustainable agriculture production, protect the district’s remaining forest, protect its water sources, ensure the participation of locals in the governance of natural resources—including women and the youth—and secure the ancestral land ownership of the district’s six clans, guaranteed in the Land Rights Act of 2018. Its signatories include county and local authorities, chiefs and leaders of the district’s landowning communities.

From the Forest to the Lowland

A once productive agricultural community and a pillar of Lofa County’s breadbasket status, Foya has seen that profile disappear gradually, beginning in the last three decades. The Liberian Civil War destroyed the district’s farming facilities.  A significant portion of the district’s forest has been lost to poor farming methods, leaving a huge portion of savannah grassland towards both the Sierra Leonean and Guinea borders. The region experiences bushfire every year and its rivers are drying up. This year, it witnessed rare flooding after a river overflowed its banks, washing away some houses, local officials said.

To reverse this downturn, parties to the compact have agreed to embark on lowland, mechanized farming, engage in planting and replanting of trees, and each party has set roles and responsibilities. These measures coincide with the district’s fire law, which punishes violators with a prison term and a fine.

The compact is in line with Liberia’s pledge to conserve 30 percent of its forest, supports the country’s commitment to the Paris Agreement to, among other things, increase the size of its forest through reforestation degraded land. It contributes towards the achievement of agriculture production and sustainable management of natural resources pillar of the Pro-Poor Agenda for Prosperity and Development.

Persuading farmers to leave the forest and go to the swamp is a key component of the compact. It involves farmers from Intofowar—the oldest cooperative in Liberia— Maliando and Rural Women Multipurpose Farmers’ Cooperative Societies. They get seedings from Agricultural Infrastructural and Development Company. IDH invests in the company, which tills the soil for the farmers using power tillers, and offers planting advice. Harvesting three times a year—as compared to once previously—farmers are expected to increase their yield from 2.2 to 4.5 metric tons of rice, said Mohammed Kamara, the chief executive officer of the company. The agreement targets 10,000 farmers with an average of a hectare per household, Kamara added.

In return, the company will purchase the rice and pound it at its giant-size mill in the district, bag and sell it.  Some 1,000 farmers are benefiting from that portion of the compact, which currently covers 20 out of 80 hectares it targets, according to Robert Kettor, the project manager of the compact. Three of nine prewar irrigation dams have been repaired and water channels to supply water to the lowland constructed.

“It is a win-win situation and kind of creating the market linkages for them,” said Kamara in an interview with The DayLight after the signing of the pact.  “The lowland has more benefits in terms of yield compared to that of the upland. I think the project’s goal and objective are to have a sustainability plan for the communities, most especially those that are producing rice.”

The compact also focuses on the forest, aiming to rid the district of savannah grass. Teogbroma, a cocoa firm, has provided thousands of seedings of the tree crops to farmers. They will plant them in areas overtaken by the savannah. There are thousands of seedlings of palm, fruit and shade trees for the production of the cocoa. The farmers are expected to harvest the corps in three years and sell it to the cocoa firm, according to the arrangement.

“We teach them how to plant cocoa. A lot of the community don’t have the capacity to stand against the savannah,” Kafumba Kenneth, project coordinator for Teogbroma, told The DayLight. “We want to establish facts about growing cocoa in the savannah. Once that is established, we can now scale up and start to think about how much we made and how much the community made.”

Technically, the compact started three years ago with a participatory land-use plan for the district. IDH worked with local authorities and communities to put together the land use plan. Using satellite images and studying its soil, the NGO identified the border region’s land was suitable for agriculture: palm, rubber, vegetables, rice and sugarcane.

After that, IDH supported the Social Entrepreneurs for Development (SESDev) to guide the district’s clans in obtaining legal rights to their lands. They were the first communities to do so in Liberia. They are now poised to receiving their customary land deeds soon, according to Siakor as he presented all six communities their article of incorporation and business registration. IDH is now supporting another civil society group the Community Rights Support Facility to work with them on current and future land-related deals. The general concept is to put the community in a position to make good choices for itself, void of influence from outside, Siakor said. It is typical of the model of IDH that promotes community-centered sustainable partnership with civil society, the government and the private sector.

Sandie foresees a brighter future for Foya. “The project allows our dead dream to surface,” he said. “I think we, in the not-too-distant future, we will regain our status as the breadbasket of Liberia.”