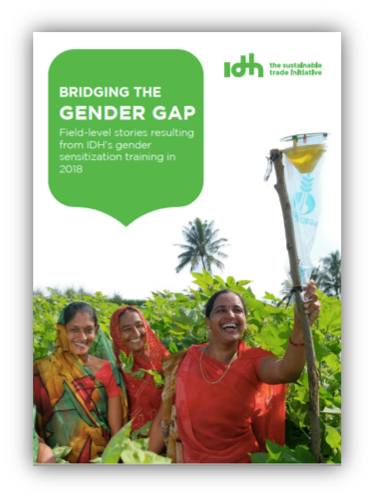 Gender discrimination is one of the biggest challenges for workplace equality in the Indian agriculture sector. Despite the crucial role women play in agriculture in India, they are generally paid less than their male co-workers. They also face a greater risk of harassment and are less likely to be considered for benefits and opportunities, including gaining access to credit, and their views may be overlooked in decision-making.

These challenges drove IDH to make a difference at the field level in promoting gender equality within its programs. Over a period of three months from July to September 2018, IDH Gender Consultant Sangita Shete conducted gender sensitization trainings with IDH’s 19 Implementing Partners in 30 locations across India, training around 2000 field-level workers, who provide extension service to over a million farmers.

Through the training, field extension workers were made aware of mainstreaming gender equality in their work, labor division based on gender, access to resources, decision making, gender awareness in project activities, and project planning for gender inclusion. The workers who participated in the trainings were able to implement these learnings over the cotton season in 2019. This document captures their experiences and highlights the field-level impact of the exercise.