At global level there is ample and growing evidence that investing in the female workforce (applying gender sensitive policies and practices; respecting human rights and nondiscrimination; promote education, training and professional development of women, etc) aligns well with business priorities.

Since 2014 the Ethiopian Horticulture Producers and Exporters Association (EHPEA), IDH, the Floriculture Sustainability Initiative (FSI) and BSR have invested in gender interventions on Ethiopian floriculture farms with encouraging results.

This report presents the findings and analysis of a Gender Business case evaluation in the Ethiopian flower sector. The research was conducted by Fair & Sustainable Consulting in close collaboration with IDH, FSI, BSR and EHPEA, and with financial support of ICCO.

The Ethiopian Horticulture Producers and Exporters Association (EHPEA), IDH, The Sustainable Trade Initiative, the Floriculture Sustainability Initiative and Business for Social Responsibility have invested in gender interventions on Ethiopian floriculture farms within the Empowering the Source program.

Together with our partner Fair & Sustainable Consulting, we conducted research to test that gender interventions in Ethiopian flower farms have lead to satisfied workers leading to improved performance of the business. In the previous chapters we have highlighted the top 1o changes seen. A more detailed summary of the findings can be found below:

The gender interventions by the EHPEA projects were generally found relevant and effective. Establishing the Gender Committees, preferably with female and male members, and training of farm managers and gender committees were key activities with positive impact. The quality and completeness of the Gender & HR policies that were developed varied.

A mix of gender interventions and other measures taken by the farms and undertaken by projects (EHPEA and others), as well as external factors, have contributed to the above mentioned changes.

Fair & Sustainable Consulting is a consultancy firm and social enterprise specialized in value chain analysis and development. Fair & Sustainable has thorough on the ground experience on gender in agricultural value chains and CSR: research, development of tools and training for a wide array of clients, including IDH, GIZ, FAO, ICCO, HIVOS and AgriProFocus.

The Gender Business case research was conducted by team of Fair & Sustainable Consulting (Netherlands) and Fair & Sustainable Ethiopia consisting of Hibiete Tesfaye, Ayalew Abebe, Jingwei Ling and Jochem Schneemann (team leader) from February to August 2018, with a field mission in May 2018.

At some farms the labor productivity increased, due to the introduction of productivity bonuses and external factors (crop, weather etc). Staff turnover and absenteeism were mainly influenced by the unstable situation in the country, alternative income options, and absence of childcare. Hence we did not find a direct correlation between gender interventions and the selected business indicators.
However our study did find positive results for workers, the majority women, such as: improved relationships among workers (f/m) and with management, more satisfied and motivated workers, more healthy workers, reduced number of reported and resolved gender based violence cases, and more women in management positions. These changes indicate improved job satisfaction, which, according to our hypothesis, leads to improved business performance and ultimately increased company profits. This is confirmed by most farm owners and managers who stated that the (gender) investments pay off, and most see gender interventions as rational and necessary for them to stay in business, not in the last place because the majority (up to 80%) of their workers is female.

What farms can do

What supporting organizations can do

IDH and FSI, together with their partners of the Gender Working Group, will develop a list of key indicators to keep track and monitor changes over time. These indicators are recommended by companies working on promoting gender equality and will help to communicate about the efforts taken and results reached in this area.

By doing this, IDH aims to support individual companies and the sector itself to monitor progress over time, quantify investments and document results reached with the ultimate goal of proving the business case for companies to invest in the empowerment of women. 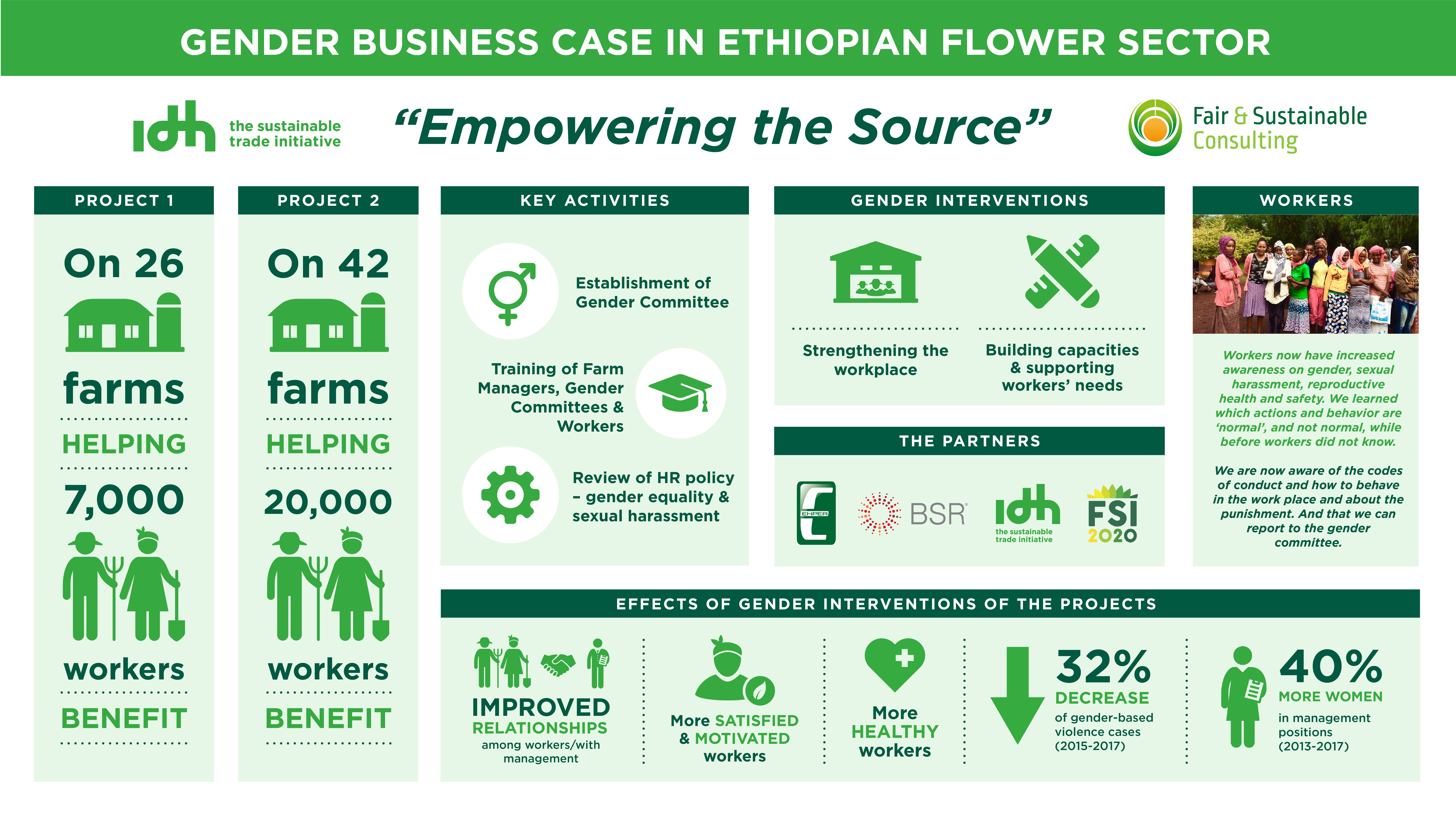 Chair of the Roadmap on Living Wages Steering Committee; Deputy Director at IDH