Côte d’Ivoire is the number one cocoa producer in the world. To get there, the road required extreme efficiency: cut down the forests, and plant cocoa in their place. In the 1970s, full sun cocoa farming was seen as the way to go. It is not surprising then that over the last century forests have decreased from 16 million hectares in 1900 to less than 2.9 million hectares nowadays due to agricultural expansion.

Part of this history shaped smallholders’ relationship with trees. In the past, timber companies were authorized to harvest trees in smallholder farms. This meant timber companies could enter individuals’ farms, cut the trees, which often involved damaging the farms, and move on. In reaction to this, farmers began to cut down trees in their own farms to avoid the interference of such companies. But this does not mean they did not respect the forests. In fact, the forests were a source of food and were often peoples’ main source of medicine as public healthcare was largely unavailable. In this way many smallholder farmers respected and depended upon the forests. 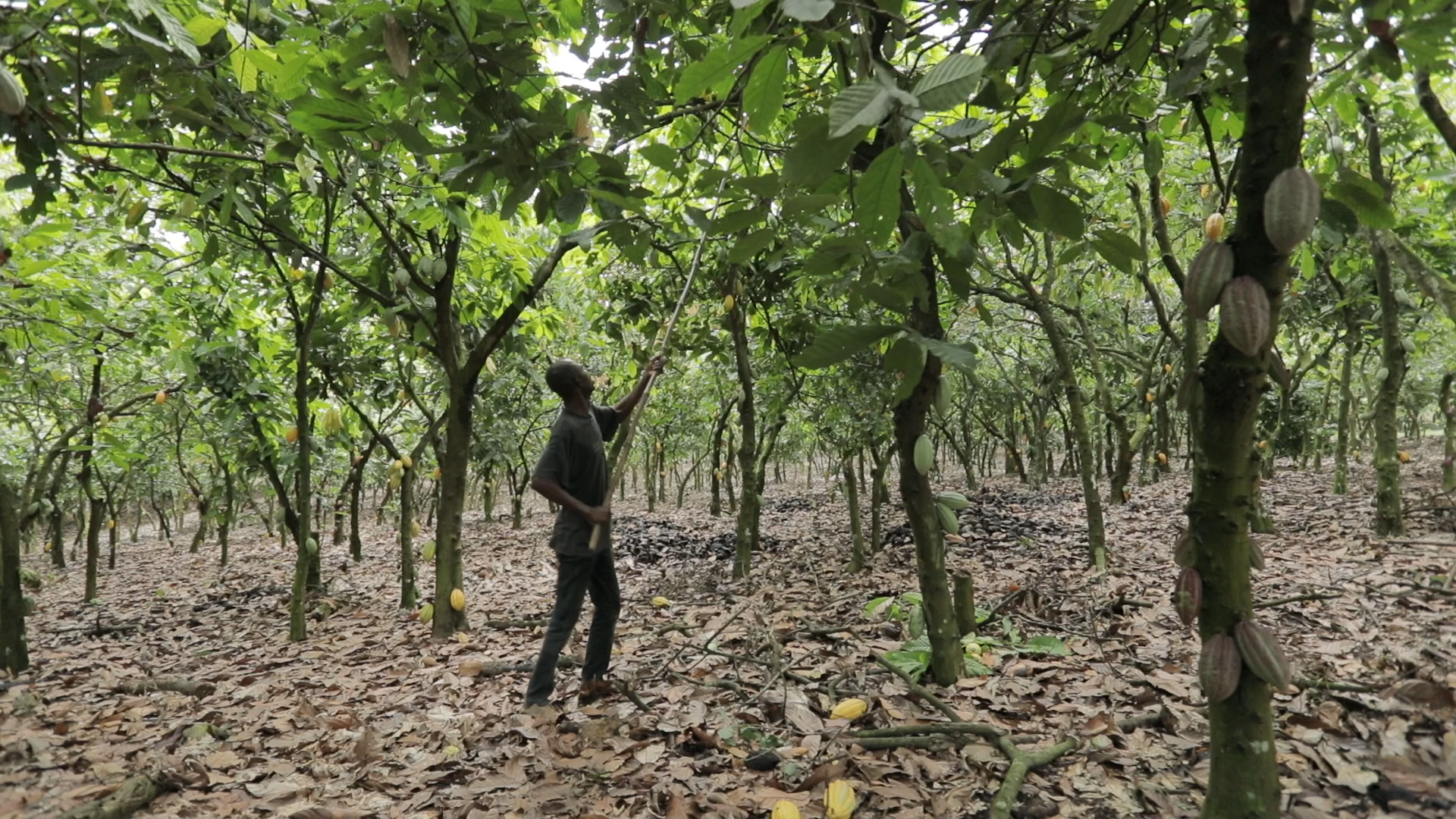 Now we see a shift in perspective across diverse sectors: government, companies, and smallholder farmers. Cocoa agroforestry is becoming a priority for cocoa sector stakeholders, as its benefits are better understood. In particular, agroforestry can help mitigate the impacts of climate change on cocoa farming. A recent study showed that cocoa agroforestry contributed to climate change mitigation by storing 2.5 times more carbon and to adaptation by lowering mean temperatures and buffering temperature extremes.[1]

Companies are piloting Payment for Environmental Services (PES) schemes so that farmers are further incentivized to plant forest and fruit trees on their farm. These kinds of programs are transforming the relationship between smallholder farmers and trees. Now farmers are no longer threatened by timber companies interfering with their land and can gain economic benefits for their contribution towards maintaining biodiversity and climate change mitigation.

Alongside actions for protecting and restoring forests, the urgency to close the living income gap of farming households is gaining momentum as a key challenge to address. It is estimated that the living income gaps for the average cocoa farming families are 39% in Ghana and 59% in Cote d’Ivoire (source: 2020 Updated Anker Calculations). Previously, the only way for a cocoa farmer to increase their income was through increasing their cocoa production, and they often did so by expanding into forests, where the land is more fertile. Recently, the Côte d’Ivoire government, together with the Ghana government, has decided to address cocoa farmers poverty by increasing the price paid to farmers. The two governments have introduced a ‘differential’ of US$400/ton above the floor price, with the objective of increasing income for cocoa producers to help them achieve a living income. This is an important step in the right direction. But price increases must be accompanied by other interventions aimed at improving incomes or what we call a “smart-mix” of interventions tailored to specific needs and ambitions of farmers and farmer organizations. These interventions should focus on multiple income drivers including land size, cocoa yield, cocoa price, non-cocoa income and production costs.

One such intervention which is known to support farmers to invest in their farms is access to relevant and affordable finance.  to higher yields of cocoa and non-cocoa crops. The Farmer Coop Investment Program (FCIP) was set up as an initiative co-funded by IDH and the Conseil Café-Cacao to facilitate investments to farmers and farmer organizations in partnership with financial institutions and agribusinesses. An example of a project supported by FCIP is a program supported by the Dutch company, ETG, which promotes agroforestry through the lens of its economic value to the cocoa supply chain.

Long-term loans are equally needed alongside working capital loans as it takes time for trees to become marketable. Lending in Africa is largely short-term, with farmers having to pay back quickly, so it is often not possible to pay back with the earnings of their production, but instead they need another source of income to cover that cost.

We see that cocoa farmers are keen to integrate environmentally sound practices into their production and their knowledge is a key contribution to high-level discussion around climate change mitigation and adaptation, and to closing living income gaps.

We see that cocoa farmers are keen to integrate environmentally sound practices into their production and their knowledge is a key contribution to high-level discussion around climate change mitigation and adaptation, and to closing living income gaps. One example of this is that smallholder farmers in Africa are, by definition, ‘multi-crop farmers’. Meaning most cocoa farmers support their income through growing other crops alongside cocoa as they understand the importance of services provided by trees on soil fertility, water retention, shade etc. This is a reminder that smallholder farmers may often have the answers that government or companies are searching for, so they must at the centre of all programs designed by governments, companies or NGOs.