Silas: No more business as usual

The documentary “Silas” celebrates the true power of individuals that protect their communities against corruption and environmental destruction. The documentary portrays the story of Liberian activist Silas Siakor, who has been working for IDH since 2016 as landscapes manager in Liberia, and his fight for land rights and better management of natural resources in Liberia. Upcoming in March are several screenings of this impressive story.

Silas has been working for IDH to help organize palm oil production in an environmentally friendly way in Liberia. With our Liberia program, we aim to protect forests and reduce poverty by developing palm oil outgrower models that include the communities, government and companies. Before joining IDH, Silas was already very involved in protecting these areas. Silas has won the Goldman Environmental Prize in 2006 and established a non- governmental organization, the Sustainable Development Institute, where he and his staff continued to conduct research and advocate for the rights of Liberian people and the need to manage Liberia’s resources sustainability and equitably. 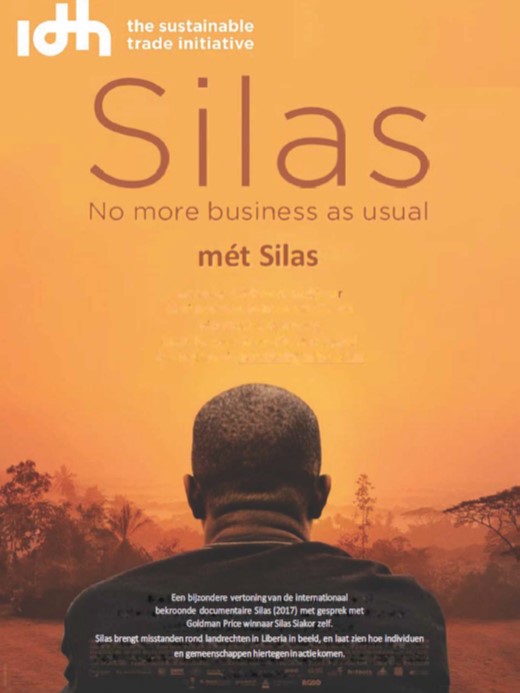 When a third of Liberia’s land is secretly signed away into the hands of multinational corporations, Silas decides it has been enough. “Silas” portrays the story of Silas Siakor, a Liberian activist dedicated to crush the corruption and illegal logging that destroys the lands of his home country. Together with a network of committed citizens he goes from village to village, armed with mobile cellphones, to document the pillaging of the country’s natural resources. On their journey they uncover corporations and nepotistic politicians who enrich themselves by impoverishing Liberian families and the environment. As the battle for accountability gains momentum, rural communities unite to protect their land and their future. Over the course of five years, we follow Silas on a thrilling investigation that inspires a generation of young activists to raise their smartphones and demand change.

There are screenings of “Silas” on Saturday 24, Sunday 25, Tuesday 27 of March in The Hague, and on Wednesday 28 March there is an activist night with Q&A where Silas joins. Tickets are available via Movies that Matter.