Central to the Frameworks is a commitment to no further conversion of any forest land for cocoa production. The companies and governments pledged to eliminate illegal cocoa production in national parks, in line with stronger enforcement of national forest policies and development of alternative livelihoods for affected farmers. The two countries produce nearly two-thirds of the world’s annual supply of cocoa, the main ingredient in chocolate and a range of other consumer products.

The set of public-private actions announced today represent unprecedented commitments on forest protection and restoration, and sustainable cocoa production and farmer livelihoods. These combined actions, which are aligned with the Paris Climate Agreement, will play a crucial role in sequestering carbon stocks and thereby addressing global and local climate change. 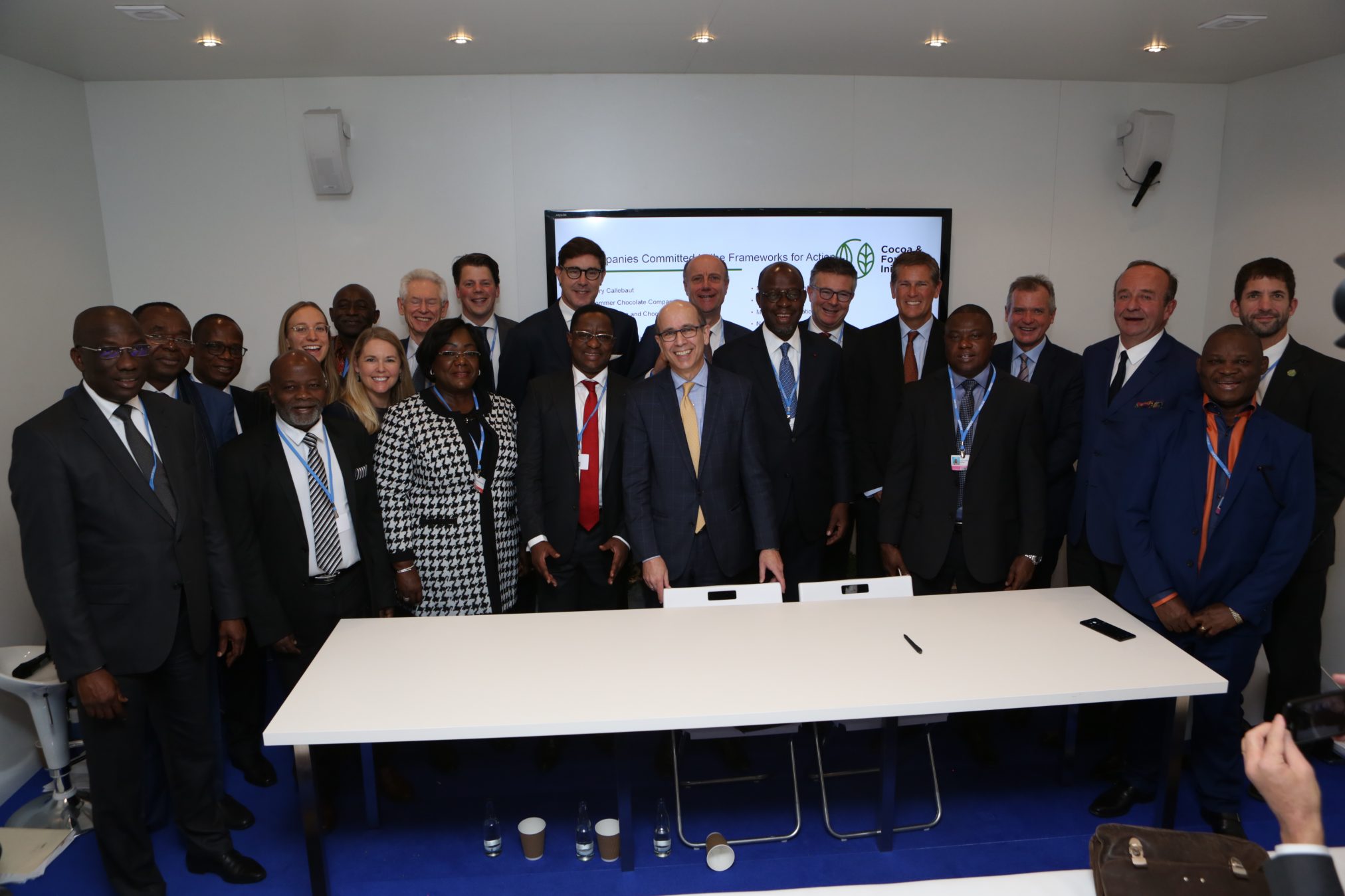 Both countries announced plans to introduce a differentiated approach for improved management of forest reserves, based on the level of degradation of the forests.  Up-to-date maps on forest cover and land-use, as well as socio-economic data on cocoa farmers and their communities will be developed and publicly shared by the governments. Chocolate and cocoa industry agree to put in place verifiable monitoring systems for traceability from farm to the first purchase point for their own purchases of cocoa, and will work with the governments of Côte d’Ivoire and Ghana to ensure an effective national framework for traceability for all traders in the supply chain.

Joost Oorthuizen, Executive Director of IDH: ‘The joint commitment of leading cocoa companies, governments, civil society and donors to end deforestation in cocoa is crucial to its success. It is great that we have achieved this commitment in only six month. Now we need to translate the Joint Framework of Acton into tangible activities on the ground to make it happen. The  next steps will be to organize meetings in Côte D’Ivoire and Ghana with companies, governments and other partners to set that process in motion’.

The two governments and companies agree through the Frameworks to accelerate investment in long-term sustainable production of cocoa, with an emphasis on “growing more cocoa on less land,”. Key actions include provision of improved planting materials, training in good agricultural practices, and development and capacity-building of farmers’ organizations.  Sustainable livelihoods and income diversification for cocoa farmers will be accelerated through food crop diversification, agricultural inter-cropping, development of mixed agro-forestry systems, and other income generating activities designed to boost and diversify household income while protecting forests.

The governments and companies, which represent and estimated 80+ percent of global cocoa usage, commit to full and effective consultation and participation of cocoa farmers in the process, and promotion of community-based management models for forest protection and restoration.  The governments will assess and mitigate the social impacts and risks of any proposed land-use changes on affected communities, and ensure provision of alternative livelihoods and restoration of standard of living of affected communities as needed.

The governments and companies have committed to a comprehensive monitoring process, including a satellite-based monitoring system to track progress on the overall deforestation target, and annual publicly disclosed reporting on progress and outcomes related to the specific actions in each Framework.

Speaking at the event, Côte d’Ivoire Minister of Water and Forests Alain Richard Donwahi said, “The forests of Côte d’Ivoire are an essential resource for the socio-economic development of our country. We support this Framework for Action and the vision it lays out for preserving and restoring our forests, including the national parks. We are pleased that the Framework is aligned with our National Policy of Preservation and Rehabilitation of Forests and the REDD+ strategy to secure our natural resources and help us to implement it.”

“The Government of Ghana is committed to upholding the actions agreed in this framework and will do our part to ensure the Framework’s success.” said Ghana Minister of Lands and Natural Resources John Peter Amewu, “This includes enhancing environmental governance and supportive measures that enable cocoa farmers to adopt cocoa agroforestry practices that are climate-smart and well integrated with our REDD+ strategies.”

World Cocoa Foundation Chairman Barry Parkin said, “These comprehensive Frameworks for Action are important landmarks as they spell out a series of steps by both governments and industry to stop deforestation in cocoa-growing areas. In making good on these commitments, the public and private sectors will be partnering on actions that result in cocoa becoming a serious agroforestry crop, where different trees and crops co-exist on the same land and previously deforested land is being rehabilitated. This approach could serve as a model for other commodities.”

Read more about the Cocoa and Forests Initiative