On March 16 2017 the twelve largest global chocolate and cocoa companies committed to develop cooperative, multi-stakeholder frameworks to help address deforestation and forest degradation in their cocoa supply chains in Cote D’Ivoire and Ghana. The meeting was held in London, together with Ghanian and Ivorian authorities, and hosted by Prince Charles, HRH The Prince of Wales.

The agreement signed commits the participating companies to develop and present a joint public-private framework of action to address deforestation at the United Nations Framework Convention on Climate Change 23rd Conference of the Parties (COP 23) meeting in Bonn in November of this year. This is a big step forward, as the cocoa industry – following the Palm, Pulp & Paper, Beef and Soy industries, acknowledge the key role Cocoa plays in tropical deforestation in West-Africa and commit themselves to support local authorities in fighting the battle against deforestation. Together with the World Cocoa Foundation and the Prince Charles sustainability unit (ISU), IDH will take the lead in supporting  the companies to define the action plan.

The agreement, signed and concluded during a meeting hosted in London by HRH The Prince of Wales, commits the participating companies to develop and present a joint public-private framework of action to address deforestation at the United Nations Framework Convention on Climate Change 23rd Conference of the Parties (COP 23) meeting in Bonn in November of this year. 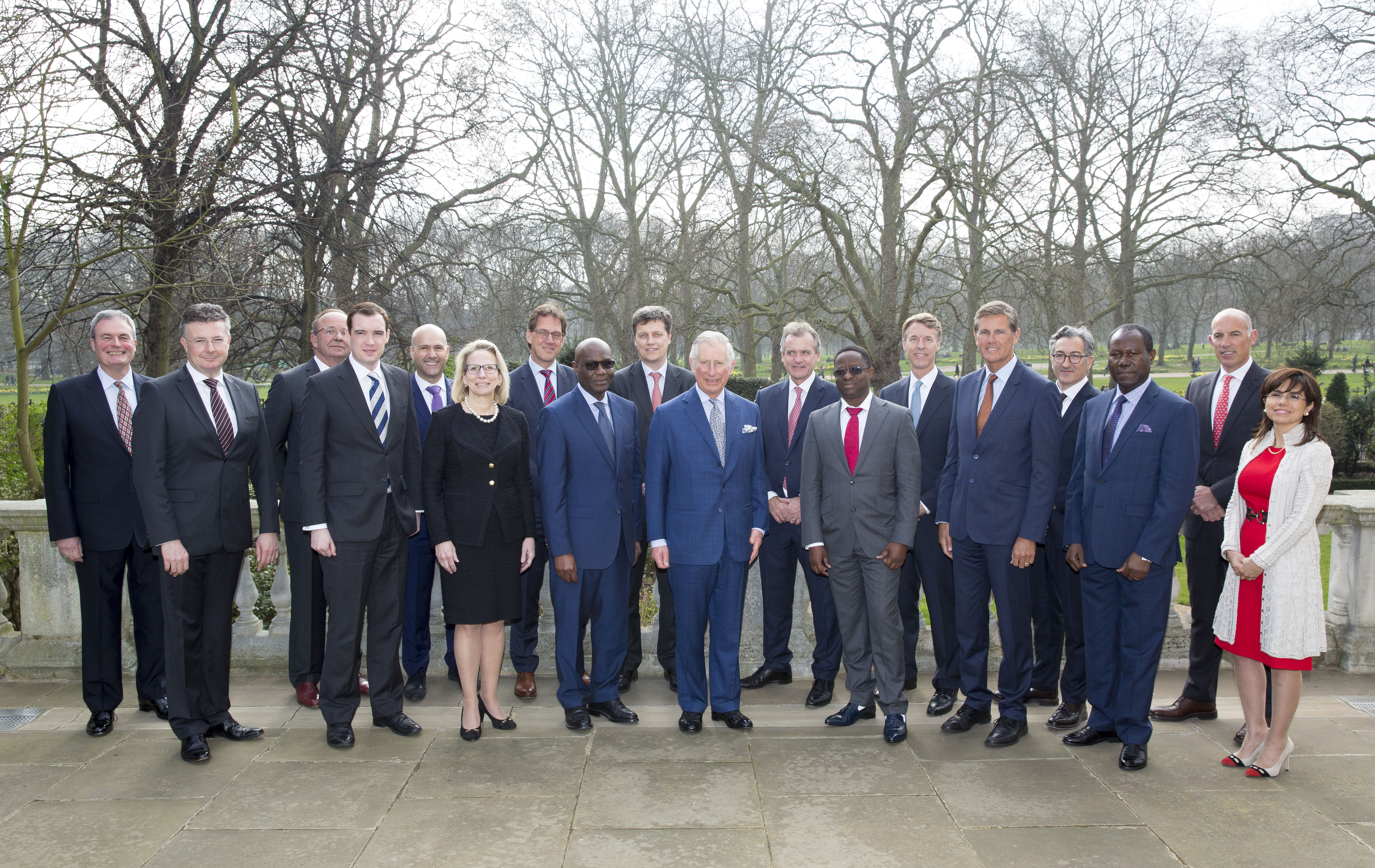 The meeting, organized by World Cocoa Foundation (WCF), IDH and The Prince’s International Sustainability Unit (ISU), is the first of its kind covering the global cocoa supply chain.

Speech by The Prince of Wales on Cocoa and Tropical Forests

Senior executives from the 12 companies stated their commitment to develop an actionable suite of measures to address deforestation, including greater investments in more sustainable forms of landscape management; more active efforts, in partnership with others to protect and restore forests in the cocoa landscape; and significant investments in programs to improve cocoa productivity for smallholder farmers working in the cocoa supply chain.

Côte d’Ivoire and Ghana are the world’s leading producers of cocoa, and many observers point to cocoa farming as a driving force behind rapid rates of deforestation in both countries.

According to WCF Chairman Barry Parkin, “Until now, only a few industry members had committed individually to address the issue of deforestation in their supply chains. Today marks a crucial step forward because 12 leading World Cocoa Foundation member companies have agreed to work together as never before, and in partnership with others, to solve this problem.  We look forward to more companies joining the effort and are grateful for the leadership provided by The Prince of Wales in convening today’s landmark event.”
The meeting brought together a cross-section of the world’s largest chocolate makers and cocoa buyers, producers and traders on senior executive level, including Barry Callebaut; Blommer Chocolate Company; Cargill; CEMOI; ECOM; Ferrero; The Hershey Company; Mars, Incorporated; Mondelēz International; Nestlé; Olam and Touton. Also present at the signing were ministers and senior government representatives of the two leading cocoa producing countries – Côte d’Ivoire and Ghana – as well as France, Germany, the Netherlands, Norway, Switzerland, and the United Kingdom.
New York Declaration

“Côte d’Ivoire, the world’s leading producer of cocoa, was proud to sign the 2014 New York Declaration on Forests. We stand ready to partner with the private sector so that together we can meet the goal of eliminating deforestation from the production of agricultural commodities, including cocoa. Today we are happy to join with The Prince of Wales, World Cocoa Foundation, IDH and others in taking this important step along the course toward conserving, restoring and managing forests for the benefit of all Ivorians“, said Aly Touré, Côte d’Ivoire’s Permanent Representative to International Commodity Bodies. 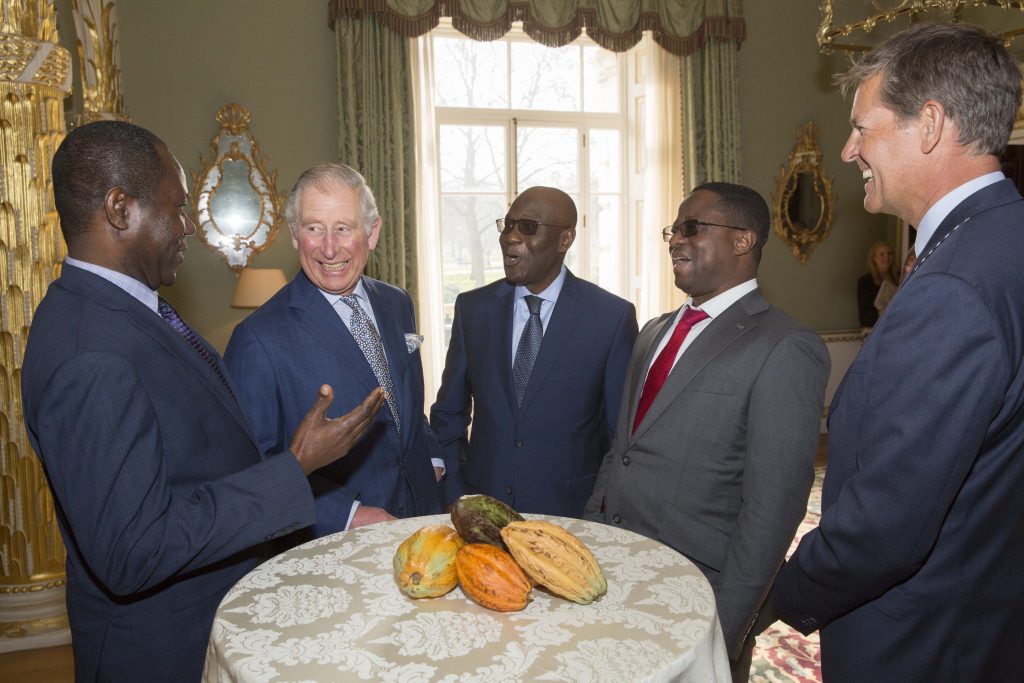 Hon. Dr. Owusu Afriyie Akoto, Ghanaian Minister of Agriculture: “As the second largest producer of cocoa in the world, we are excited to be part of this noble step by The Prince of Wales, World Cocoa Foundation, IDH and private sector companies to work towards reducing the rate of deforestation emanating from cocoa production. On our part, we are poised to enhance the environmental governance regime in the cocoa sector and implement actions that will enable cocoa producers to adopt cocoa agroforestry systems and practices that are climate smart.”

The 12 companies will now engage in a planning and consultation process under the umbrella of IDH with non-government organizations, farmer organizations and other relevant stakeholders to build the joint framework to be unveiled at COP 23.

As farmers in Africa, Southeast Asia and Latin America seek new areas of land to grow crops including cocoa amid increasing global demand, WCF, IDH and ISU organized an industry commitment to address forest degradation recognizing that deforestation is likely to increase in thefuture unless concerted action is taken. This commitment builds on the cocoa industry’s existing initiatives in partnership with producer country governments and other stakeholders to design sustainable cocoa development programs aimed at improving the livelihoods of the millions of smallholder farmers who grow cocoa.

Joost Oorthuizen, Executive Director of IDH: “We feel very privileged and honored to be involved in this process. In recent history, the cocoa sector has proven to not be afraid to address difficult issues like child labor, malnutrition, and poverty reduction, all in a non-competitive manner. This meeting provides a great starting point to expedite action on the deforestation issue in concert with other relevant stakeholders.”

For more information on the commitment and what will happen next: click here