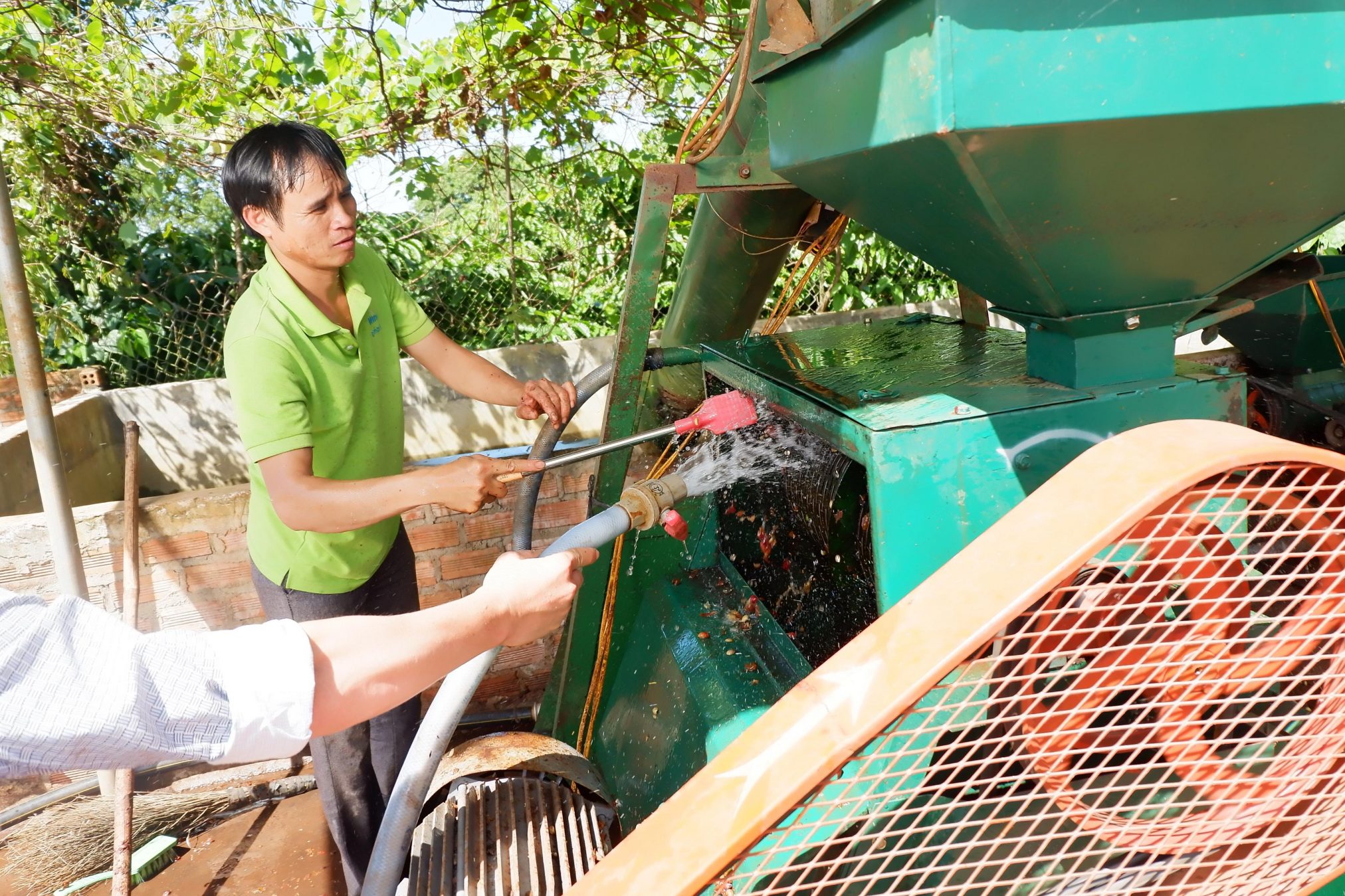 A seven-year collaboration towards more sustainable coffee and pepper production in Vietnam reached a turning point on 22 January 2020 as ten farmers agreed to pool their lands for a common irrigation system. The consensus marks a milestone in the combined effort of IDH, businesses, local authorities and farmers since 2013 and was reached at a meeting in the Ea Tan Commune, Krong Nang District, Dak Lak Province, Vietnam.

Three of the ten farmers committed 5,000-square-meter plots of their coffee and pepper farms to build a community pond. Others provided permission to establish a pumping system and plant water pines on their lands, which can help stabilize water banks and prevent soil erosion. This will reduce the need for farmers to tap into groundwater through surface-water irrigation of 30 hectares of coffee and pepper farms.

The new irrigation system contributes to area-based water management as part of the PPI (Production, Protection, and Inclusion) compact for Ea Tan Commune with contributions from local authorities, SIMEXCO (buyer of coffee and pepper), IDH and the farmers.

Ms. Tran Quynh Chi, IDH Senior Program Manager, said: “It is great progress to help us achieve an important objective of the PPI Compact in Krong District – that is to reduce water amount for coffee production from the current level of 550-600 liters a tree per round to 450 liters and increase the use of surface water for coffee irrigation to 10,500 hectares.”

The community irrigation system in Ea Tan Commune is the first one in the PPI Compact area of Krong Nang District and represents a significant change in the behavior of the local farmers. Up to now, farmers expected an irrigation system to be provided by the government and for water to be available free of charge. When no irrigation system was available, individual farmers would build wells to water their farms with groundwater. Over time, this placed the area’s water resilience at risk.

The project “More coffee, Less water” funded by the Swiss Agency for Development and Cooperation (SDC) and Nestlé found over-exploitation of groundwater by farmers in the Central Highlands and a lack of enforcement of responsible use of water. Up to 800 liters went into watering a single tree per coffee production round, leading to localized drought and water scarcity that affects agricultural productivity and people’s quality of life.

The new community irrigation system, which also benefits neighboring farmers, is the first time private land in the area has been volunteered for a common irrigation system. Once completed, the system will be handed over to the farmers for management, who have shown support for a pilot fee system. This will fund the system’s regular maintenance in the future and is in line with the water pricing policy of the new Vietnam Law on Irrigation, due to come into effect in 2021.

According to the farmers, the strong commitment and actions from SIMEXCO, IDH and local authorities have motivated their decision, alongside benefits such as reduced production costs and environmental protection.

The process started in 2013, when IDH convened farmers, local authorities, and private companies, including global roasters, like JDE and local companies like SIMEXCO, to drive sustainable coffee production in the Krong Nang District and others. In 2018, SIMEXCO, IDH and partners convened more than 50 farmers to plan and invest together in a concentrated coffee and pepper production zone of 70 hectares.

These stakeholders signed a PPI Compact to replicate the model toward responsible and sustainable coffee production, which is expected to cover an area of more than 24 thousand hectares and benefit more than 6,600 farmer households by 2025. All stakeholders voluntarily signed a Memorandum of Understanding to implement Vietnam’s first ever PPI Compact.

SIMEXCO is committed to procuring local farmers’ products and play an important role in the process. They connect farmers in the coffee value chain, provide technical training and knowledge transfer and support the establishment and operation of Ea Tan Cooperative and two other cooperatives. SIMEXCO also facilitated the meeting held on 22 January where the consensus was reached.

The local authority of Krong Nang District leads a governance committee for the PPI Compact to ensure its effectiveness and transparency and motivated farmers and the private sector to engage actively through demonstrating their own commitment to more environmentally friendly coffee and pepper production.

Mr. Truong Hoai Anh, Chairman of Krong Nang District People’s Committee, said: “IDH is helping us to accomplish our responsibilities. They have coordinated and engaged all relevant stakeholders at all levels so that all of them are on the same way to achieve mutual objectives. We appreciate it a lot.”

“We are very happy to see these changes and are looking forward to spread it over the whole PPI Compact areas: not only in Krong Nang District of Dak Lak Province but also Di Linh and Lac Duong Districts of Lam Dong Province,” Ms. Chi said. “With large-scale upscaling, this can support climate change adaptation and sustainable water management for the future.”

Find out more about IDH’s work in Vietnam.