Kpanyan Statutory District is facing challenges common across Sinoe County in Liberia’s coastal south: economic instability, inadequate critical infrastructure, land degradation and climate change. Land use is a contentious topic in Liberia, as historically, the people who traditionally lived on the land were not formally recognized as the owners. In 2018, a new Land Rights Act was passed into law, whereby communities could become legal owners of their traditional homelands. 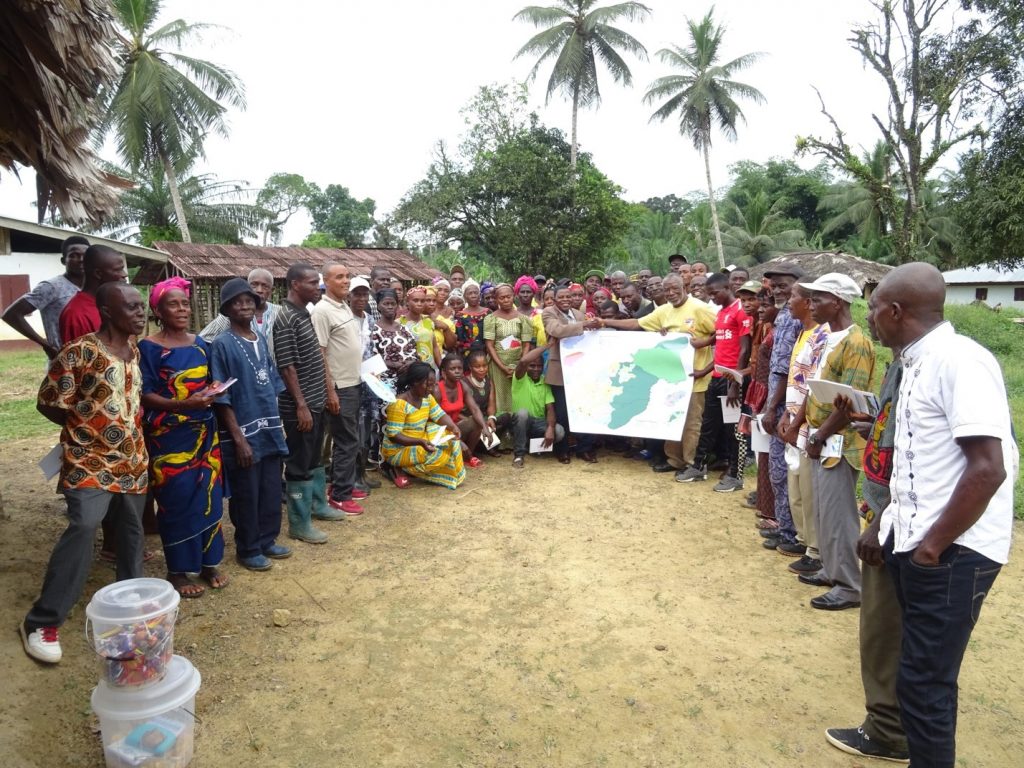 To claim their land rights, communities are required formalize their land claims and develop a Land Use Plan that accounts for the interests of all members of society. “The law is very clear about that,” said Silas Siakor, who leads IDH’s work in Liberia, “the women have to be there, young people have to be there, and other interest groups have to participate in the process.”

In December, Kpanyan became the second district in Liberia to have its land use plan validated by stakeholders including the Liberia Land Authority (LLA). The plan allocates land for agricultural production, including food and cash crops, forest for sustainable management and for community conservation, and proposes protection for critical resources such as rivers and streams. It contains maps that show where exactly certain crops can be grown in the district and the scale at which those crops may be cultivated. Once completed, the plan will cover more than 100,000 hectares across the entire district.

This land use plan is one of several steps that Kpanyan will need to go through in order to claim formal rights to the land. The next steps will be to harmonize the boundaries of their territory in agreement with the neighboring communities, develop the own by-laws to govern land relations, establish community land governance bodies and finally, the Liberian Land Authority will survey the land and register their application.

Liberia’s 60,000-hectare Foya in Lofa County is even closer to formal community ownership. Residents and stakeholders completed a land use plan for Foya in June 2019 with technical support from Meta Meta Research. Six clans in the district, with financial support from IDH, have completed the initial steps and the clans are in the final stages of the process to receive the formal and legal ownership of their customary land.

“This is only the beginning,” emphasized Siakor, “with 160,000 hectares now under proper land use plans in two districts, developed by the people themselves, we are sowing the seeds for more sustainable use and development of Liberia’s land, forest and water resources.”

IDH plans to support Liberians to bring 500,000 hectares of customary community land under land use plans and full community ownership by the end of 2020. The team in Liberia has been met with a high degree of motivation and engagement. In both counties where IDH is working, Siakor explains, “communities are more than eager to get this done.”

Siakor found that the land use plan process has also brought some traditional farming practices back into the spotlight, such as leaving a clearance area around streams and other bodies of water unplanted. The community mapping process showed that “some of the old things we used to do to keep the land good and fertile for all of us, some of these can be brought back.”

IDH’s landscape approach in Liberia is based on strengthening land governance and securing community land rights, improving food security and income diversification in rural areas. With this in place, investment opportunities can be opened up that provide options for communities to increase agricultural productivity while protecting important conservation forests, Siakor said.

While formal ownership of their land empowers communities, well-regulated and responsible investment is vitally needed to provide long-term stability. Many Liberians rely on cash crops to make a living, and farmers need reliable buyers for their crops. “Once completed,” said Siakor, “our project will lay the foundation for conflict-free investment and inclusive development in the target communities.”